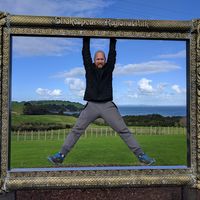 I enjoy meeting people, although most would have described me as introverted while I was growing up. When traveling through Europe with a group of fellow engineering students back in college, I developed the reputation of being the one most likely to start talking with someone outside the group. Life has been better as a result, I would say.

I have a dry sense of humor. I'm laid back and even-tempered. I'm fairly left-brained in regard to being analytical, but I am a little creative, play a couple instruments well (see interests below). I usually have lots of questions for new acquaintances, as long as they're willing interlocutors.

For many years I worked and traveled. I would pick a city, pack my laptop, and spend 2-3 weeks living there. I was busy during the day but then got to explore and meet people on the weekends and sometimes on the weekday evenings. I did this in Montreal and DC in 2008. For 2009, it was Austin, London, and New York City. Then Miami, New London CT, San Francisco, and Boston in 2010. I did a 9-month Australian working holiday in 2011, spending most of my time in Perth, Melbourne, and Sydney. I lived in New Zealand in 2012, spending a couple months in Dunedin and about six in Auckland. 2013 was New Orleans and Ann Arbor, MI. I went back to New Orleans for 2014, and since 2015 I have been living in Auckland.

I've figured out that working all day makes me boring for potential CS hosts, so now I spend most of my time staying in long-term hostels and temporary houseshares, but I love local CS meet-ups and weekend excursions.

If you're curious, I write software for for my job.

Most of my travel photos are on Facebook. Here's my profile: http://www.facebook.com/profile.php?id=2344943

I'd like to have a net positive effect on the world and not impinge on others.

I joined back in Jan 2009. I've donated, surfed, and met up with *MANY* local CSers. I've hosted every request I've hosted in Jackson and Ann Arbor, MI. I've also been to the weekly or monthly mixers in Ann Arbor, San Francisco, Boston, Perth, Melbourne, Sydney, Dunedin, Auckland, and New Orleans.

Surfed twice in Austin, TX. Surfed once in Detroit, MI. Surfed once in New Zealand. Hosted a touring rock band in Jackson, MI.
Hosted a couple times in Ann Arbor, MI.
Organized CS activities to attend improv comedy in Dunedin, NZ.
Organized CS gatherings to attend a reading of a locally written play and to watch a film at an art museum in Auckland, NZ.

I like getting to know interesting people and philosophizing with them. I am interested in (and make my living from) software, the Internet, and business. I play piano and percussion, and I've been known to play tuba on a few occasions. I also have a fondness for Bacon Salt.

I regularly read The Economist, which constantly reminds me how little I know about the world.

I jumped off the Bloukrans Bridge in South Africa, the world's tallest bungee jump.