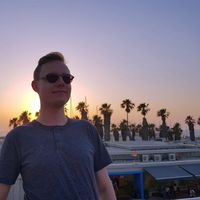 (I know that everyone here appears to love traveling, love meeting people and be open minded. The thing is that this is kind of is the common ground of most people here I guess, although there might be some just writing it because everyone does. Yes, I say things like this as well, but I mean it, and I try to tell you a few more other details about me here too, so read on. Although, there are some additional things about me which you could find interesting but these are things you would have to find out in person, not by reading a profile.)

People describe me as a funny and likable person, I am especially good at solving problems in creative ways. I love to travel, fortunately I already get a lot around due to my occupation requiring me to do business trips quite often. Well, at least it was like that before COVID happened, right now it's quite limited of course.

I like adventures and trying new things. I can even be convinced to try things I previously considered a no-go for me, sometimes this will make me change my mind! There are a few exceptions, though, and one of them includes smoking. I do not intend to smoke, ever - but I have no problem if others smoke. Although I can get very talky once I got started, I am often shy when it comes to starting a conversation, especially with strangers... so I am very happy if the circumstances (like couchsurfing) "force" me to talk to new people! I'm sometimes socially awkward, but I do my best.

I am trying to get to "living my dream" as near as possible. The life and our world (I intentionally don't say "earth" because this wouldn't include outer space!) has a LOT to offer, and unfortunately I only have seen a short blink of it yet, to be honest, both in terms of locations and possibilities!

I'd like to meet people from all over the world. Sometimes I am looking for a couch, but I also often like to use Couchsurfing for meeting other travellers at my destination even when I'm staying somewhere else. I'm also happy to host people, of course!

I like sci-fi movies/series (not the stupid ones, but those which at least almost make sense for a techy person like me - Stargate!!!) and comedy movies (again, they mustn't be too stupid). I listen to a lot of different music, including mainstream dance pop, video game soundtracks, Japanese music, Jazz, Folk, Israeli music and classical music. There are only two kinds of music I really dislike: Really heavy metal with lots of shouting and Aggro-Berlin-style hip-hop. Oh and: Marvel is great.

I was walking on the roofs of Jerusalem, jumping from one house to the next - it made me feel like James Bond.

I and my best friend went to the beach of Rome and were the only people there, we ran around, laughing, splashing through the water, it felt like a dream.

I was on the roof of an abandoned army base in the Golan Heights at ~1200m height and the clouds formed a rig a few meters below where I was standing, so I could see mostly clouds beneath me like in an airplane, as well as mountains and the sunset - this was amazing.

I went with a sign saying "Who wants to come to Paris with me? For free, today, until Sunday - Travel buddy cancelled" and it worked out. I found someone at the last minute - I first met him 10 minutes before our train left, and the trip was a blast.

Hm, well, I guess that's more than one thing, oops.

I can mostly teach about tech stuff, including computers, especially more uncommon skills like reverse engineering, building robots, ... Apart from that: Playing the piano, opening a business in Austria, binding your shoelaces more quickly, speaking Hebrew, mixing a nice drink...