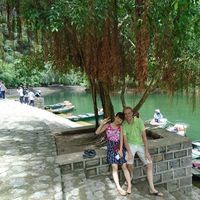 I am living in Đà Nẵng with my wife Quyên and our infant son Hapi. I work as a researcher in theoretical physics. After having lived and worked in Belgium, Spain, and Brazil, I decided that I prefer Vietnam. I play the classical guitar in much of my free time, the remainder is taken up by reading. I'm calm and quiet, more of a listener than a talker.

Surfing with and hosting some of the most wonderful people of the world. Can only hope for more...

So far I hosted:
in Ghent, Belgium: Thibault and his friend; Martin
in Valencia, Spain: Santa and Leo; Luisa and Anja; Vina and Gloria; Chris and Wyatt; Ben and Anita; Monika and Tom; Teresa; Sarah and David; Léo (saved from sleeping under a bridge together with another random guy); Sylvie and Hervé; Allison (saved from sleeping in a nightclub)
in Đà Nẵng, Vietnam: Julia and Igor; Tijo and Haky; Jorge and Jodi (through BeWelcome); Daniel and Rosa; Phong; Artur; Jing; Adrian and Mélanie; Walter and Lilly; Morten and Rochssana; Martina and Martí; Philippe and Annie; Tom and Nick; Quintí; Amos; Nico and Lisa; Tonchi; Natalie; Tamsin and Matthew; Michael and Amber

I have surfed with:
Diego in Brasília, Brazil; Johan in Valencia, Spain; Morgan and Anna in Bilbao, Spain; Regina and her son in Grenada, Spain; Efren in Barcelona, Spain; Nuria and Maxim in Barcelona, Spain; Minh and Vinh in Vinh, Vietnam; Erica in Hong Kong; Pauan in Rio de Janeiro, Brazil (over a week); Djalma in Recife, Brazil; Phúc in Danang, Vietnam (about a week); Hoài in Hội An, Vietnam; Hiếu in Hanoi, Vietnam (several times); Arielle in Singapore; Diện in Hanoi, Vietnam; Hitoshi near Osaka, Japan; Taisei in Kyoto, Japan

I can explain how to compute non-perturbative effects in Yang–Mills theory using path integrals and Schwinger–Dyson equations, in the case anyone is interested... :-)