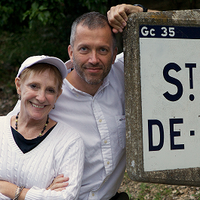 Originally from Indiana [Dede] and North Carolina [Wayne]. we moved from metro Atlanta to Greensboro, NC in June of 2015 - after Dede retired. We live in a kool part of town, 3 blocks from the campus of a major public university, 15 minute walk from downtown restaurants, etc.

We try to support Kiva, a provider of micro-loans in developing countries.

Dede's Philosophy: "it is nice to be important, but it is more important to be nice." - quote from Sir John Templeton
_ _ _

(wayne)... still working on it. I seem to have drifted away from the Albert Camus/Jean Paul Sartre existentialism of which I used to be so fond.

i try to be a nice guy. I think that a good philosophy might be "Step on as few toes as possible as you walk through life, but if you DO accidentally step on a toe... apologize."

A good traveler has no fixed plans, and is not intent on arriving.

A scholar who cherishes the love of comfort is not fit to be deemed a scholar.

A leader is best when people barely know he exists. When his work is done, his aim fulfilled, they will say:
we did it ourselves.

we have an informal CS goal; we like to try to host at least one guest for one or two nights each month. Dede and I typically have one or two bedrooms open for visitors to the Greensboro area.

we have hosted surfers pretty regularly since the spring of 2010. we ourselves were hosted by fantastic folks in Germany, France, Switzerland... summer 2010, and Germany again in spring 2011. made it back to France and Germany, and southeast England in 2014, France and Germany in 2017, cycling in France in 2018 ...we hope to be headed back to the Continent for more cycling sometime in 2019.

wow, umm, er... we're interested in lots o' stuff -- history, current economic issues, exercising at the YMCA (surfers are welcome to join us with a guest pass), the school-teachin' bid'ness, talking with folks from other places, hangin' out with younger folks, hangin' out with older folks, singin' and dancin' and oh yeah - almost forgot, movies

anything at all with Lauren Bacall and Bogart...
The Big Sleep, Key Largo in particular

...Dede on the other hand seems to think that George Clooney is better-looking than Bogart, Come ON !
_ _ _ _

Johnny Cash (if you have never heard the Johnny Cash cover of Marley's "Redemption Song" - it is fantastic).

"Emancipate yourselves from mental slavery,
None but ourselves can free our minds."
_ _

...Johnny Cash's cover of the U2 song "One" is also brilliant.

(wayne) - This might not qualify as "amazing," but I once got upgraded on a British Airways flight to London. It was just after Elton John had bought a flat in Atlanta.

I was lucky to get to baggage claim very quickly [due to the upgrade], and I noticed five, six, seven, then twelve, thirteen, fourteen matching pieces of designer luggage... Then i saw a short guy in a leather Chicago Bulls jacket. I got to share a couple of laughs with Sir Elton.

(Dede) -- i have been married to Wayne for more than 20 years, and have maintained my sanity for most of that period of time - amazing! ...have yet to be convicted of any charges of spousal assault against my husband
- for not picking up his socks, and other household infractions.

Wayne has developed a very broad, and (in some subject matters) deep understanding of stuff in the realm of economics, history - or so he says...

Dede can teach tolerance to almost anyone, and she can share her ideas about how she gets along with practically everyone she meets.