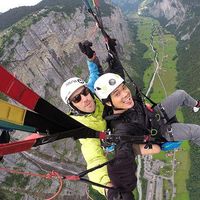 I just finished my PhD and now time to further explore the wonders which this world is offering.

Well I want to believe that I am nice and friendly. I am easy going and is willing to try new things or get caught in new adventures! I am very much open to any exciting things!nature tripping, extreme adventures, or just a chat about anything under the sun over a couple of bottles of beer is ok with me. I really talk a lot and I like knowing people, their own stories, their own adventures and immersing myself to different culture by meeting different people from various parts of the world. I want to live life to the fullest =)

Carpe diem! :p life is too short to be wasted =)

A friend of mine introduced me to this concept a few years back and ever since, we have tried surfing into other people's couches or hosted some surfers.

i think couchsurfing bridges and builds a world without boundaries, without division and a great way to explore the world!

a lot! I'm interested in doing exciting things that i've never done before. Or explore vibrant cultures and exquisite traditions for me to learn about other countries and ethnicity. I want to explore the world, go to the mountains, dive into the seas, drift with the rivers and walk into the wilderness which common people are not interested to see. Or just sit in a balcony with a bottle of beer and then just talk - about the world, the sun, politics, history, science, films, music and anything non-sense. haha

Climbed and traversed the cordilleras to the 2nd highest mountain in the Philippines, get drunk and wild in the Grand allee of Vieux Quebec, explored the streets of Athens, learned how to make Gyros in the island of Heraklion, Mykonos , made friends in the party streets of Singapore, laid lazy in an inhabited island in the Southern islands of the Philippines, dived with the bus-size whales in Donsol, spent a night in the middle of the ocean and witnessed the ocean glow because of dinos, be stranded in an international airport and made friends with the other backpackers. went drunk and food tripping in Montreal with some crazy french guys, slept in the subway, got lost in gatineau but ended up with a bunch of good, new friends. Had a l'horlogue in one of the finest microbrasseries in quebec, spent a freezing -50C street party in Ottawa, did beer tasting in Toronto. went to bath outside the ship in the Arctic, tasted a snow cone near the north pole, seen polar bears and been amazed by the majestic sunrises and sunsets in the Arctic. I lived for 2 months in an apartment just beside the Eiffel, got drunk and partied with strangers in the metro in Paris while its running, got delirium in the delirium village in Brussels, illegally climbed the rooftop of the National Library of Belgium, got invited by cool Dutch guys in a beerbike and partied with them till morning, got high with space cakes in the coffee shop of Amsterdam and toured it's canals! Started a party outside the train station in the small city of Neuchantel, got lost in the woods of Interlaken, did cliff jumping and paragliding in Murren in Swiss, rafted for 7 hours from Lucerne to Zurich! got treated with traiditonal Swiss lunch after helping build a fence, got drunk and played soccer at 2am in the streets of Naples, tasted the best pizza in the pizzeria of Napoli, hiked and got tanned in the island of Procida, had an amazing race in the ancient streets of Pompeii, got lost in the streets of Rome and was fed with Filipino foods in the old buildings of Rome, had the time of my life in the city of Barcelona! got naked and swam with strangers in the southern coast of Cataluna, was invited and learned how to make the best paella in the mountains of Valencia, lost my wallet in Paris and managed to explore the cities of in Southern France! Tasted the best of mediterranean cuisine and hospitality in Montpellier where I met one of the best friends I had in a roadtrip, travelled back in time in the fete medieval in Provins, enjoyed the old alleys of Paris with some German friends, played strip beerpong in Montreal and many many more.