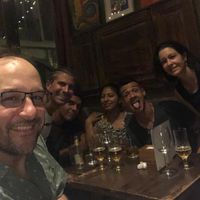 I seek the Grail!

Another programmer here! As a job at least! :p I play guitar. Classical mostly, flamenko, and then rock and roll and other things. I love playing for friends and people. I love to have a drink every now and then, so I love rakija :)

I lived in Belgrade for 15 years and then moved for 4-5 years in Italy. Since then I have been living as a nomad around Europe, since covid19 struck.

Because it is cool, a lot of interesting people here, really. I met a lot and with some I am still a friend! I hosted a lot of people in places where I lived. From year 2010, only two people hosted me. Hopefully this will change too :)

I‘ve been playing classical music on the guitar for years and years (since 1990, so you do the math ;). I play rock and roll very good as well. I play Flamenko good :) I love computer games. I have my Facebook game. I love movies!

Learned to play Flight of the bumblebee on classical guitar:
https://www.youtube.com/watch?v=v7ipN0xbr3U

Language knowledge. Traveling a lot I became linguist by chance, so now I speak fluent italian, and French, and also a bit of German, and of course ma native Serbian. Music history a little bit. Movies, computer games experiences. I can play guitar for you, mostly classical and flamenko, Spanish guitar. Honesty. People don't value it enough. Follow your dreams through thick and thin. Be responsible in the right amount :)

Stories from lots of travels that I had, CS experiences, free language lessons (I promise I won't exagarate):P Guitar music, classical pieces of various sorts from all over the world and from the best composers for guitar that ever existed on this planet. A bit of Serbian history, about the country, intro to Belgrade. Time for drink and stories. Currently I live in Italy, but I often move :)