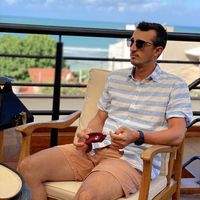 I am a paulistano, I was born and grew up in Sao paulo city. Opened for new experiences, specially in a new culture, " When in Rome do as the Romans do". I' ve been learning a lot how to survive in a foreign country.
Now I live in a small town on the farest west possible in Sao Paulo.
I work for the Brazilian navy ( temporarily just for this year. That’s what I’ve been telling me for 3 years) I am a general practitioner by the way.

I went to chicago for one night, and I had a wonderful experience with couchsurfing. Since than I decided to download the app and host as many travelers as possible.
When I travel I like to meet up, I normally stay at a hotel. As I travel alone I rather have some locals to show me the city around.

I love to talk with people, does´t matter the age,social status, religion, race, gender, level of education ( there is no boundaries to me except the language sometimes ). I also love to eat, specially deserts. I love tv shows, movies, some books, they change by the season.

I like pop, folk, rock and also funk ( pesadão)

I went from São Paulo, to live in a city called Fayetteville in Arkansas for one year and a half. Right now I am currently living in a small town in Sao Paulo state, smaller than Fayetteville. I’ve dove in the Caribbean ocean. I’ve flown in an air balloon in Turkey.

I can teach some portuguese, some English too. I am also addicted in trying new food, and sometimes I make really good food.
I can provide a free medical appointment ( just one)

some stories about my life, maybe a really good food recipe, perhaps a dish :D