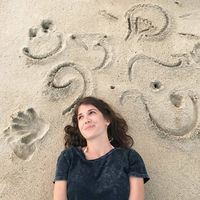 I am from the United States but I have been living in Mexico City since August 2014. I travel whenever I can!

I've been hosted in Spain, Switzerland, Mexico, Turkey, Egypt, Finland &amp; Austria.
I have hosted/continue to host in my home here in Mexico City.
In December 2014, I hosted a great couple from New Zealand who were driving from Canada to Argentina and ended up driving part of the journey with them and another friend I met on Couchsurfing (from Mexico City to Oaxaca)!

Having lived abroad quite a few times, I know the importance of becoming integrated into the communities I move to. Every time I move to a new place, I always turn to CS to help me make friends and get involved. Such an excellent resource.

My principle interests/topics that I could speak about forever: any religion, linguistics, Sufjan Stevens, Iceland, feminism, what you view as your country’s main social problems, world geography trivia, NPR, riddles, and Reddit.

Books: Harry Potter, David Sedaris, Swedish crime novels (particularly Camilla Läckberg), the Glass Castle, Gillian Flynn, Middlesex, the New Jim Crow, Into the Wild (the only book I have read where the movie is JUST as good!), the Geography of Bliss.

As I am from Seattle, I tend to love slow, kind of sad Indie music that one would listen to on a rainy, rainy day (aka most days in Seattle).
I love Icelandic music: Olafur Arnalds, Of Monsters and Men, Pascal Pinon, Sóley, Múm, Jónsi... It is my dream of all dreams to visit Iceland.

Movies: I have seen very few. Mostly I stick to documentaries. Haima (a film about Sigur Rós/Iceland), Into the Wild, and more recently, the Argentine film, Relatos Salvajes.

I taught English in South Korea twice, camped in the Sahara Desert in Morocco, gone parasailing in the Bahamas, watched the sun rise in the largest salt flat in the world (Uyuni in Bolivia), hitchhiked solo in Europe, went on an 11-day backpacking trip in Yosemite National Park, snuck into Disneyland twice, ran a marathon and several half marathons, ate dog soup, danced under the stars in El Salvador, won a rad government grant to study my master’s degree in Mexico, traveled around Nicaragua on a motorcycle, learned to drive a stick shift in the abandoned back roads of Estonia, spent a summer as a nanny in a small village in Catlunya (Spain), became religious and then became unreligious, attended every Harry Potter premiere, spent two days in solitude in the forest (no food, no company, just a lake and iodine drops), went to a Beirut concert on my 19th birthday in Portland, became fluent and comfortable and happy in a second language, and traveled to around 30 countries.

I speak English, Portuguese and Spanish.
I can do a really good bird call.
KNITTING, how to cook vegan food (especially tofu, which is the best but has a bad rep.), how to play 'Smelly Cat' on the guitar.
I can count to ten in Hebrew, French, English, Spanish and Catalán.