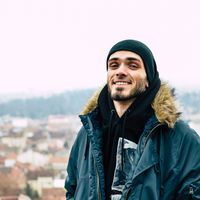 Hey there!
I'm a Moldovan guy with a mix of Romanian and Russian cultural background. I've lived in the US, Romania, and Moldova, and hoping to move someday to a Latin American country.

I started traveling a short time ago, but since then I try to do it as often as possible, as the trips I've done hold most of my best experiences.

I do programming for living, and I'm passionate about it.

I'm a huge procrastinator and I fight it.

I like photography and I love capturing the places I've been to as well as the people I've met there.

And I'm always up to new experiences.
I wish someday, I would be able to enjoy over and over again the same place, the same activity, and the same food. But until I have found this trio, there are very few things in this world I would not try at least once.

Because no travel experience stands beyond the one with a local. Also, because it's a great way to find amazing people from around the world while you don't have enough time for traveling.

I have some good friendships with people who hosted me, who were hosted by me; and even those I've just met on hangouts.

A few years ago, I had no idea that someday I would ever have people from let's say, Mexico or Taiwan who have left a mark on my life. Now - I'm looking forward to meeting them again.

I've been a welcome guest on a Mexican wedding anniversary, I joined my first hiking trip, I found out new ways to spend amazing time in my own city, I found out about different peoples and cultures probably more than my history teacher could ever tell me, I have swum for the first time in an Ocean and walked through clouds in mountains. Everything mentioned started from here.

It's just amazing, and I'm looking forward to both increasing this piggy bank of beautiful moments, and to paying back for them whenever I have an occasion.

Walking through the clouds in the San Jose del Pacífico mountains.

Swimming in the Pacific Ocean during the sunset in Puerto Escondido.

Scuba diving in the Caribbean Sea, around Cozumel Island.

I could teach you some basics of photography. I'm far from a "pro", but at least there are a few people I've helped to switch from "auto" mode on their camera. That's something :)

I will be glad to find out more about your culture, the local customs, food, and places (especially those off the bitten path). I'm always happy to share my experiences regarding what I've learned in the countries I've visited and from people I met.

I have a particular interest in self-management and self-understanding. Some of the books I've read and discussions I've had about it, literally - changed my life.

I try persevering as much as my procrastination allows me in my profession. So if you want to discuss programming or trading technologies, just let me know. I also have some general knowledge in economics and digital marketing ;)

Also, well, we always can share some drinks in between.