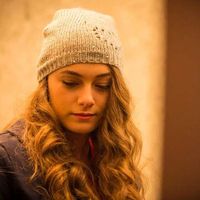 I work at a production company as an Assistant Producer/ Project Coordinator.

I've been interested in the art scene ever since I was a kid. I act, model and play the flute. I participate in different orchestras and bands and occasionally travel with them internationally to perform! I also have a passion for baking and attempt to try every desserts recipe posted on Tastemade or Pinterest.

YOU CAN'T PICK A FAVORITE CHILD.

Culture! and desserts of course. I sadly can't cook proper meals but thankfully my father owns a restaurant.