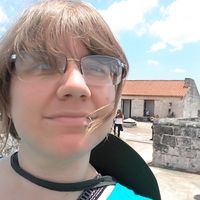 I'm between places, between spaces, lost in some kind of Chattanoogian dystopian landscape, so I can't host for right now. I'd love to give advice or meet up, though!

My name is Kathleen, but I generally go by Katie, Kale, or sometimes DoNuTz. Don't ask. I like aliens and spaghetti muffins. If i can ever find any, i go to shows (especially rock or punk, but anything else is cool too.) I love to be outside and climb on things. I like creating and doing things and having fun. I spend a lot of time trying to squeeze a little justice out of the dried up husk of equality and access we're all living on.

I think life is what you make it to some extent, and I try to make mine and everyone else's as good as possible. I believe in second chances, and third, and fourth; but only if the person truly is trying to change. i believe there's good in everyone, even if it's only a tiny spec and it's buried really deep in their souls. I believe in God and even Jesus but don't always know the best way of communicating with him/her/it/them.

I've couchsurfed while backpacking in Canada, Central America, and Europe, on road trips in the US and Mexico, and vagabond experiences in China, South America, and the US. So far, I've stayed with roughly 91 different Couch Surfing hosts. It's a great way to meet new people and see a new place. Locals can give you so much more information than some website or guidebook. And there's so many great people out there, several of which I've come back to visit later on.

When I lived in Albuquerque, I got pretty involved with the local CS community. I've organized meeet-ups and participated in the Couch Crash. Many of my friends in Abq I met through Couchsurfing, both travelers and other locals. I've hosted roughly 4 different times so far.

I'm looking to get more involved in the Couchsurfing community here in Chattanooga and I also love helping out travelers and showing them around.

I love movies, but sometimes they're so dumb it's ridiculous. I read books all the time, although i can say the same for them. I usually read whole books in Barnes and Noble because I generally can't afford to buy them. Libraries are great. I like comedy, fantasy, adventure, pretty much anything. I like pretty much any kind of music too, although rock and punk usually top my list. Video games should probably be in this category, too. They're pretty cool.

I know Calculus and Physics and probably still have some Chemistry somewhere back in the cobwebs of my brain, but I think what's most important isn't what you learn in school. You can learn from anyone and anything.
One of the most important things i can teach people is not to judge others. We need to open our minds, open our hearts, and close our mouths.

I can hang out with you, share stories and ideas, and tell you about my own area and experiences. I'm also pretty adaptable, so I'm up to try new things and I try to help out when people need it.