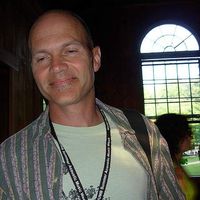 Happily married for over 30 years. We have two daughters who are now more mature than I am, and both are all done with the college thing and out on their own. Me, I love to travel, design stuff, make stuff, play guitars, write songs, read, write, converse, contemplate, meditate, philosophize, and go out for draft beer. I'm a progressive, vegetarian animal lover and social justice proponent, but I won't ever get in your face about that stuff (unless you ask me).

I don't subscribe to any particular dogma, but I do believe in some kinda something that ties us all together. I'm open to hearing anyone's ideas about what's behind the metaphysical curtain (in fact that might be the only real conversation there is), but I'll pick you apart if you claim to have a monopoly on the truth.

We're lucky to have a too-big house with acres around us, and I want to share. I'm also hoping to surf next time I travel so I can see the belly of a place (instead of just the back).

Only used CS twice as a couchsurfer, but have hosted lots of folks. We've yet to have a negative experience.

I spend more and more time in the music world in the last few years, and released my first album (Late Bloomer) in Jan, 2013. Playing music is the only thing that I never tire of. It calls me constantly, and I love the mystery of it.

We've got a music venue/community arts resource center here called Doodad Farm, built around an old log tobacco barn. It's not about making money; it's about building community and sharing art and ideas. It's the best thing we've ever done.

Tom Robbins writes my books with help from folks like Carl Sagan, Barbara Kingsolver, and Dr. Seuss. Some guys from Liverpool do my music. I also like classical (but know nothing about it), bluegrass, blues without grass, singer songwriter stuff (Prine, Cliff Eberhardt, James Taylor). All pretty mellow. Movies, yep.

I once had an experience during meditation that was the most "real" moment of my life, and those few seconds had a huge effect on the direction of my life.

I spent several weeks in India -- the dirtiest, stinkiest and in many ways the most miserable place I've ever witnessed. It was also completely beautiful and magical. Oddly, I felt very much at home there, like I somehow belonged there.