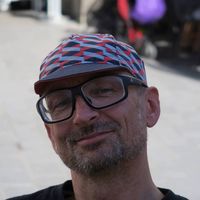 I'm passionate about cycling as urban transport (and touring), open access to the scientific literature, trans-cultural evidence, local food and many other things besides. My work is rather solitary and sedentary, it's a big flat when the kids aren't here, and it's great to welcome interesting people from around the world.

My parents were members of SERVAS, an international organisation which paired hosts and guests back in the day when this was just about the only way people from behind the Iron Curtain could afford to visit the UK. And we got a lot of Americans too. You had to write a letter! Old school! Conversation with people from all over the world was a great education.

I have a big flat with spare rooms for the kids who are generally with their mums. So I've got a bit of space to welcome people who want to visit Nantes. If you come by bike (always to be preferred), your bike will join mine in the garage overnight. Shared kitchen, bathroom and toilet. I like cooking, and I'll probably cook dinner for you.

Car parking in my neighbourhood is tightly regulated. If you must travel by car, I'd recommend you park up elsewhere and use public transport while you're in Nantes. There's a tram stop right outside my front door.