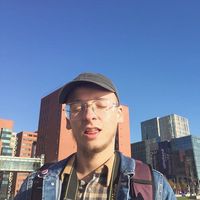 To meet new people in parts of the world I haven’t traveled to yet and to host kind people when I have the chance.

I went on a 4 month backpacking trip through Europe and Southeast Asia with my partner in winter 2018 and we only had a backpack full of clothes each. I have played/booked shows with some of my favourite bands. I have toured with my bands in the United States 3 times. My screamo band played a show in Munich, Germany under a bridge.

Death Grips is the Captain Beefheart of the 2010’s

Stories of shows I’ve played, places I’ve traveled, and my hatred of the u.s. :-)