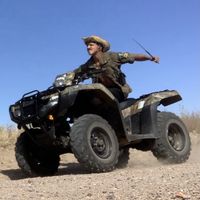 My name is Andre and I live by the following three phrases which I repeat over to myself like mantras as necessary:
-Hell yeah!
-Cool, man
-Keep it movin'

Beyond that, I am an immigrant from Canada chasing my own American dream here in the US. I am living in Downtown Phoenix currently with my wife waiting for a visa application (and a permanent resident application) to process so I can begin work as a schoolteacher (hopefully by end of October at the latest).

I love playing guitar, hiking, mountain biking, physical work, and creating in general. I have been hitch-hiking and backpacking for many years, and after all that gathering I am looking to build.

I studied history in university and deployed to Afghanistan with e Canadian army in 2008.

I like making new, like-minded friends (veterans, burners, musicians, writers, etc.) wherever I find myself, and depending on which city I'm in, the meetups and hangouts can be really useful. I surfed a few couches over the years as well and recently started hosting (2020).

I have been playing guitar since March 2018 and have probably gotten about as good as one can get in that time. I jam with others and play on the street often.

Creatively, I am figuring out how to marry my music, my writing and my images in a way that is aesthetically pleasing. Of late, I have been tooling around in the VR space a lot, trying my hand at world-building as I believe that will become a standard means of socializing in the next few years.
I am also really excited about the potential which AI text-to-image platforms present.

I don't play video games often but Hideo Kojima's 'Metal Gear Solid' series has done a lot to shape my outlook on life over the past 25 years.

I circumnavigated the globe back in 2011-2012.
I got robbed four days into it and after I got over feeling sorry for myself I decided to soldier on despite having lost all of my equipment, documents, etc.
It was amazing. No longer encumbered by a heavy bag and lots of gucci gear I didn't need I moved a lot quicker and I realized that ‘he who wishes to travel happily must travel lightly.’

I love playing guitar. I would be happy to teach and learn. I have met many phenomenal players in my travels and each has imparted something of value.

I worked with children in Germany, Honduras, Nicaragua and Canada so very often I have to break new skills down to their core teachable components.

Some kids at the last place I crashed taught me how to ‘loon whistle’. I’m not good at it but I would be happy to ‘learn you all I know.’ 😜

I can certainly share my love of music and conversation. I clean up, I cook, I garden, etc.

In conversation, I listen actively, stare deeply and speak truthfully.