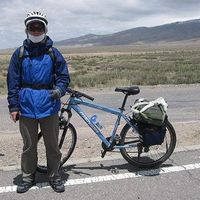 I'm like water and take no forms: as some have mentioned in the reference, one can have deep discussions with me, yet I'd welcome shallow ones alike; I'm a polyglot while well acknowledging the limits of languages; I've received rigorous math education, but after all it's nothing but another mind game; I'm a programmer but well, not just me but many of us excel at sport; I can be quiet as by the way my name suggests, and I can make noises.
At the end of the day, one will find out that name tags don't describe me best and I daresay nor do they to any other people or things. One way to find out a truer me is to read my profile here; another is to meet me in person.

I meditate for scientific purposes. It is my opinion that should meditation need to have an intended purpose to be acknowledged universally like it did traditionally (which it doesn't, judging from an objective modern perspective, as it's just a means to whatever one wishes to achieve), it would have to be the better understanding of our consciousness, and by no means a mere relaxation.

Music: classical music, jazz, of course other genres have outstanding pieces as well, and in fact as long as there exists some form of melody, I often can't help expanding the motif in my mind into something new :D

Book: Siddhartha -- or not really -- allow me to elaborate on this: I'd started reading novels/theaterplays let's say assiduously since a fairly early age and at one point after I turned 20, I felt like I'm done with all of them due to my gradual lack of attachment to as well as interest in both the plots and the styles, and have since then been reading critiques (not just on novels though) and actual notes on adventure, research etc. exclusively. Only once in a while would I still skim through short stories, just to improve new languages or to reactivate old ones.
But hey, Hermann Hesse was in comparison with his contemporaries a clairvoyant thanks to his unique family background and consequently his upbringing, and yet even he couldn't completely jump out of the box like many of his characters have done, or precisely grasp the essence of the Indian as well as the Chinese schools of philosophy (nor was it necessary given his principally intended audience). Every time I read works by him, I'd be once again reminded that we (probably) can never be categorically unbiased (take it as a pun if you wish) -- at least not with the help of bare human languages and the reasoning based on these -- despite all our effort to become so. Yet the illusion that we might just come all so close to impartiality by linguistic means is what drives many mad. Fortunately not me any more.
Hesse's irreplaceability to me thus lies rather in the fact that he's just vaguely pointed out a novel (but not new) worldview through just about the right amount of poetic delineation. It's left to our imagination or better personal experience to decide how alternative views might look like but in any case the door is left open.
It was through Siddhartha that i came across Hesse, and it's in this regard that I list it out there.

On Jan 1 2016, my friend and I, with the intention to lose some weight from Christmas candies and totally oblivious of the closing of even many bakeries, went out on our bike trip from Bremen Nord to St Peter-Ording with empty stomach, and finished 176km bike road and some other kilometers on the ferry where we had some chili con carne. I rode another 40km or so the next day...

Half a year after that 176km within one day, I biked 450km (with heavy backpack even with laptop) in 4 days, half of the time struggling through the mountainous areas. Special thanks to two couch surfing hosts on the way, I was not only able to survive, but I could also get recharged fully over night. For that I'm grateful.