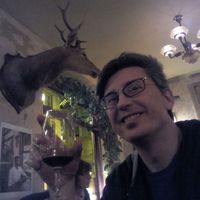 I'm a bit of geek. I do think math, biology, computer science are fun. But I also think drinking is fun. Especially cocktails. But wine is nice too. And gin. New people are also really fun. And sugar gliders. And traveling. And bar hopping. And good food. And parties.

I'm from Serbia originally, studied in the US, lived in Switzerland and now in Paris. Mmmmm... cheese. And duck. And wine. :)

Personal philosopy sounds so official... lets see, maybe "live and let live"?.... "you can do anything if you try hard enough"?... "beer before liquor, never been sicker, liquor before beer, you're in the clear"?.... "red means stop, green means go"?... oh, I have no idea, but I tend to get by anyway :)

Why am I on Couchsurfing? Because I still think it is a great way to travel and a great way to live. In recent years I've slowed down a lot, don't host new Couchsurfers very often, and stay with people less. But I'm still in touch with many people I've met though here, some actually remain great friends. Other would say hi after 3, 5, 7 years, and it would be great to hear from them or host them again. My couch is still often full, and I love that.

Overall, it's been fantastic... so many cool, different, interesting, kind people. I've lost count, but more than 100 people hosted, and probably around 30 different hosts. Hate to say it, but restores your faith in humanity a bit.

Interests? Many, random, all over the place..

Love going out, movies, clubs, bars, parties, coffee shops, good food, good drinks... read a lot, listen to music, sing in a choir ... ski when i get a chance, travel (doh!)... hang out with friends... whatever is fun

Hmm... I do love traveling, but I think I need to start planting some trees to offset all that carbon. But hey, when you add it all together i'm about 3/4 way to the Moon and that's kindda cool!

I read a lot... mostly contemporary 20th century authors, some classics, occasionally some SciFi and Fantasy. Currently reading "House at the End of the World", quite good, if a bit depressing. Most fun word in the book: rubensesque!

Cheesy I know, but when i think back, the most amazing things have actually been the people. So many different, crazy, fun, strange, new ones you can meet nearly every day. That said... there were a few place/events that I'll never forget: seeing dozens of shows at the Edinburgh Fringe Festival, skiing at about 3000m in the Swiss Alps, sitting at the main podium of the UN hall in Geneva, seeing the end of Tour de France, watching tennis at Roland Garros, happy hour at Drum &amp; Bell in Beijing, cocktail barhopping in NYC, hanging out with monkeys in Indonesia...

Uh, oh, and I nearly forgot.... may not have been amazing, but amazingly funny for sure. Cristian, my awesome host in Verona, was telling me about this cool article he read about CouchSurfing, and how he really liked what this one guy said, how having people stay with you is "like traveling in your own home". I started laughing, and it took some time to explain to him and his friends why. Well, the funny thing was, without knowing, he was actaly quoting me right back to me! Few months before my trip to Italy, my friend Sam wrote that article. He managed to make some sense out of my ramblings about CouchSurfing during the Paella 2007 party and included it in his story. I felt like a celebrity, if ony for about 15 seconds :)

I can do tricks with my zippo. It's easy, really :-) Although, since I don't carry it with me these days, I can do trick with your zippo.