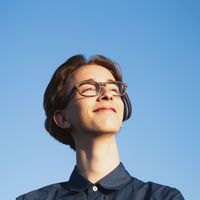 I like team sports, reading, of course travelling and the most I like talking about wierd things. Like for example about super artificial intelligence whitch will maybe destroy us in some time?..:D
haha, I love new technologies as well.

If you want to, I can make nice cup of tea for you. And thats because of I've been working in the tearoom for a long time.
And if you can offer me a cup of coffee it'll be lovely - it's my new hobby so if you have a knowleague about coffee you can give me a lesson.

For most of the time, over the school time I just study, taking a good times with friends, cooking a dinners for them and watching Netflix or some documentary series. It seems little bit booring yeah? But I don't thing so.
(I do ofc more but I can't write it everythink here 😅)

I prefer to listen a HipHop but I do not hinder about any kind of music.

I like to read books where I can think. For example The Alchemist, The Four Agreements, The Monk Who Sold his Ferrari and others.

Last summer holiday I was connected to the fenomen of the low-cost travelling.
I started just myself In Dublin, Ireland where I wanted to get a job, but than the plan was changed. I hitchhiked around the Northen Ireland and than I took a ferry to Liverpoolu and right after the bus to London where I worked for one month.
Than i knew that my next school year starts in less than 6 weeks so I came with my friend from London to Ibiza, than, after three days to Barcelona where se meeted up with next two ours friends.
However after a week they had to come back to Czech so we wished them a good flight.
....BUT me and my friend Viktor, we wanted something bigger...so...with a lot of enegry the long hitchhiking way was started.
Through the Spain, Andorra, France, Monako, Italy, Lichtenstein, Austria and Germany with less than 100€ we came back to the native Czech Repuclic!!

My English is not like...perfect. To be honets it takes me a some time to get into bigger corversation but don't worry, I'll do my best.

In other hand I can teach you some Czech words - it's hard bcs we have some thinks like a Ř,Ť,Ň,Á or Š but you'll like it! Trust me!

I can help you with everything what do you want. I'm good in cooking or maybe in some house works..or whatever else?..:D

And if you want to carry a positive person, so I will try😎