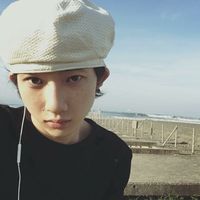 My name is Earth, I was born and grew up in Japan and America I have been traveling the world for about two years!
Around when I started to travel, to do music was the main reason to go travel but at some point I've been chasing something I'd wished to get since when I was young. Still music is in my heart yet I need to know more about myself cuz I ain't even know why I'm traveling or living either
so now I can say I'm getting experience through this journey not something serious but I had a lotta things I wanted to do but I couldn't like just going around town with someone, writing a book beside window n drinking coffee, making music in quiet room with some friends,running in park with sandwiches for lunch

Ive started traveling since 2018
why? just for fun!! our country is sooo introverts and i didnt know there is a world outside of my neighborhood myb still dont know as well
for now i just wanna travel as much as i can and meet ppl as many as i can which help to extend my world, i believe
also im broke so i rly rly thank to ppl who have helped and will help me

Now I have some interest in exploring ancient Egypt and Greek history. Or something like black magik also philosophy,psychology,astronomy,politics are very familiar with me bc I've been taught by adults too much since when I was young
Also wanna know who put this calculation system in my mind as well

It's hard to list up all my favorite music movies books since my interests are spreading so widely but Stanley Kubrick, Christopher Nolan, Kitano Takeshi are my favorite directors. Danny elfman,hanz zimmer are my favorite composer...besides them I used to listen 90's rock n hip hop too much still respect for Eminem but recently I can't listen the music turned on 440hz so more discovering books!

I have 段 of 少林寺拳法
That means I have license of martial arts is sort of Kung Fu.

guitar piano and about Japanese stuff
ive worked at japanese n chinese restaurant for total 3years so if u ask me i could teach you how to cook !!

Experiences through my life especially about Japan n music!
And I've worked at Chinese and Japanese restaurants for 3y so I can cook what u order!