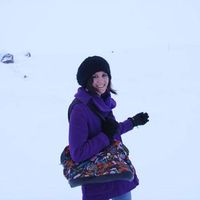 To see all the counties of England I haven't yet visited.

I've been living back in my hometown of Bristol for nearly two years, after having been away for some time and really appreciating what a super cool place it actually is. I do however frequently feel like I'm the only one in CS Bristol who's originally from the city!

Have returned to studying a little later in life-as it turns out, practically everybody else has as well. Who knew?

"If you think you're too small to be effective, try sharing a bed with a mosquito."

I've travelled alone a bit, and there's nothing quite like the exhilaration of wandering around a new part of the world and picking up new friends along the way, made possible mostly via CS.

I'm trying to get back into local events here in Bristol and host every now and again, when studying doesn't get too mad. I also try and make sure that non CSers know what a sparkly shiny bunch of people you chaps are!

Some total and utter diamonds. Even now. Most of this talk about CS having been taken over by drunk students is exaggeration.

The Importance of Being Ernest. Jane Eyre. Learning to Swim. Never Let Me Go. The Vagrants. Dogside Story. Two Caravans. Anything Wodehouse. 50 Facts That Should Change the World. The Equality Illusion, when I'm up for a laugh.

Depending on who you ask, I am scatterbrained to an endearing to maddening extent. Considering my track record of missing buses/flights due to oversleep, frequently forgetting where exactly I am and impressively managing to turn ten minute walks into two hour backwater voyages, having got myself across various parts of south east Asia seems like quite an achievement.

If anybody could point me in the direction of any lesser known local/national/international women's rights charities then I would be hugely grateful. I currently volunteer on a helpline for survivors of rape/sexual assault which is...well, hard to describe on here but it has made me very eager to get involved with other feminist organisations when my college course finishes.