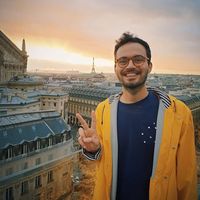 Leading a meaningful life. Being a citizen of the world.

Refer to my brain... As far as I can tell you "It's best to laugh than to cry" and "Get it properly done. Now!"

I've been doing Couchsurfing since 2008. At first, I just toured people around my hometown in Cali, cause I couldn't afford to travel. I thought: if I can not go see the world, I'll bring the world to me. :)

As soon as I had the opportunity to host, I did it. It happened when I was living in Bogotá because of work. CS allowed me to meet amazing people and it helped me discover a city in which I had been living for some months already. I used to have a night life walking tour. If I'm ever back in Bogotá, I can do it with you! :) I also met all of my roommates in Bogotá thanks to CS!

I moved to Asia in 2013 and then to Europe in 2015 . Every time I have had to move to a new city, Couchsurfers have come to rescue me and adopt me into their lives. I think I will never be able to pay back all the kindness I've recieved here.

I picked up a new habit since that move to Asia: I often travel on the weekends or I do "amazing race" style trips where I stop in multiple cities in one go. I love travelling and I love being part of the every day life of a city, even if it is for a little while. I love staying with gay people because I'm curious about how others like me live their lives around the world.

Since I love learning foreign languages, I often organize language exchanges. Sometimes in "One on one" conversations, and sometimes in groups. So chat me up if you want to help me improve my French, German, Portuguese, Japanese or even my Tagalog (Mestizo ako! Parang confidentely beautiful with a heart).

Finally, I continue on doing CS because of its people. I've met amazing human beings around the world thanks to this social network (A pretty cool cat hosted me once). I've also gotten the opportunity to live and discover cities up close thanks to them. So, I'm always looking forward a new adventure! :)

Cinéma (Fuckin luv it! Like François Truffaut once said: "What's more important? Cinema or life?!"), languages, engineering, plotting to become a multimillionaire with world changing ideas, dieing to see the world, day dreaming/Future guessing (Not so much lately). I love the vlogs on Youtube... Got more than too much subscriptions. Love Flickr. I like art (That came out bimbo-ish)... I like to write...Pf.... Don't know what else... It's a pain to write this kind of things... TED.com!

Movies: Too many to count, I'm a film freak. I have a thing for mockumentaries, weird looking French movies, New York related stuff, black humor and The sweetest thing. Update: I embrace the inner Asian and admit that I LOVE Asian cinema, ex: Horror movies (The eye 10 and Dumplings come to mind) and funny movies (Stephen Chow's Shaoling soccer and Kung fu hustle, and 100 pounds beauty).
Music: I'm far to all over the place. The ones that comes to mind.. Noir Désir, Vive la fête, Feist, Sliimy, Indochine (As far as frenchies go...). CSS, Lilly Allen (Fuck u!), Pink (as far as girl power goes)... Psycodelich rock (I should have lived the 60's). Pop-ish stuff. Love the 90's (Blur!)... Salsa aletosa (Rebelion!)... Madonna... funk, soul... Big band jazz... Weird sounding Beatles. Indie (Aka the other mainstream)... I like the soundtracks of some movies (Rent comes in mind)... Musica para planchar while karaoking... Electronic (Not a genre... More a piece of life. I like electro and dance. Love Arman van Buren)... Electro folle: Christophe! "Berlin m'appelle"..... "whatever"?

Books: Right now I'm reading a lot about anthropology and a book by Amelie Nothomb: Stupeur et Tremblement (love the movie too). Update: I feel like books find a way into your life when you most need them, right now I read: Stealing like an artist.

Seen the diary of Anne Frank for my birthday.

Seen a Van Gogh and a Manet up close.

Living in Europe for 6 months. (One word Erasmus).

Gazed at the Seine with a dear friend..

Moved my life to another continent. Twice. Once to Asia, childhood dream.

Went to NYC. The trip that took me to Asia allowed me to go for the first time to a dream city of mine. I got to be there with a dear friend and among the cool stuff I got to do were: Going to Stonewall, going clubbing (I did a pub crawl kind of thing, even the Limelight), saw the film/fashion/artsy side that I love and cool highlight, for just a little bit, I got to feel as a local while wandering in the city. Thank you so much, Kapo.

Showed people around in Bogotá. I learnt to love that city in big part thanks to CS.

Going to Japan. It was a childhood dream and I'm going to go back, next time with some knowledge of the language.

Going to Singapore for the Pink Dot. Saw Wei, Pavel, the city and this BEAUTIFUL event. The city was awesome too, the infinity pool view of the Singapore ports and bays is breath taking. And the people I met there were amazing. K, Jhon, Daniel, just to name a few.

Seeing the port and the HSBC tower in Hong Kong. Engineering childhood dream. Hong Kong proper was awesome too. I say that it's a mesh between Tokyo and NYC.

Learnt a fourth language in a second language: Learning German in English, in the Philippines.

Working in Maersk. It has been CRAZY but it has given me so much.

All ocean related events in the Philippines: Sleeping under the stars, seeing a paper lantern, going to a full moon party, going in this spider boat thingies, daydreaming while getting lost in the ocean...

Teach: A language, maybe?
Learn: Cooking tips? I adore home cooked meals. Picture taking tips? I love taking pictures and I'm always trying new stuff. A language? My objective is to be fluent in Spanish, English, French, German, Portuguese and Japanese.. You can help me with any of those. :) To travel? I travel a lot, but fellow traverlers always humble me with how little I actually know.
Share: I love sharing anecdotes, films and music... And funny as hell tv references. I love to sing! Although I suck at it! That's part of the fun! So let's sing! :)