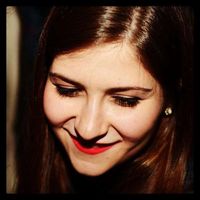 *I can't host at the moment, but I do like meeting up, so feel free!*

I'm Efrat, 24 years old, and I'm from Givatayim, Israel.
I travelled 3 months in Europe, and couchsurfed throughout the entire period.
Most of my CSing experiences have been good, and the ones that haven't - are just funny stories now.
I really enjoy reading, listening to music and watching television, sightseeing, sleeping and learning languages. I love sleeping (and I could probably do it all day long), but when I'm travelling I try to sleep as little as I can, in order to not miss out anything :)
I've learnt some German a few years ago, but never had the time to do it as I really should, so I can speak some, but not enough in my opinion. I'd always be glad to learn a bit of any language (now I can say cheers in about 12 languages!).

I'm on couchsurfing because I like the idea of travelling a bit differently, and not being in the sterile environment of the hotel. I like meeting locals, listen to what they have to say, what they know and what they think. I think that's fascinating.
Also, I know that Israelis sometimes have a bad reputation abroad, and sometimes it is justified. I want to make amends for other Israelis' behavior, and show that we're not all rude and impolite.

I love reading. Reading is like going on an adventure without leaving the house. I also love going to concerts and find out new (good) bands. watching TV and movies, I'm also into news and being updated.
I also LOVE animals, so if you have any - I'm in!
Apparently I also love the word "also", otherwise I have no explanation why I use it that much. Perhaps I need to get familiar with more words in English.

I can't possibly write them all, so I'll write a few of each:
Music: The Kinks, Buddy Holly, Bonaparte, Mando Diao, Kakkmaddafakka, The Wombats, Arctic Monkeys, Franz Ferdinand, The Who...
Books: Millennium trilogy (The Girl with the Dragon Tattoo), The Hundred-Year-Old Man Who Climbed Out the Window and Disappeared, The Pillars of the Earth and World Without End, and some thriller novels.
On TV I like to watch Little Britain, Grey's Anatomy, Orange is the New Black, Game of Thrones, and Doctor Who

August 2015: climbed the pulpit rock in Norway and sat on the edge of the cliff. It's amazing because I'm really scared of heights and usually get panic attacks. This time it didn't happen :)
Learnt to surf in Newcastle! Thanks to Tom and Lydia who were great instructors and hosts.
Went to see MANY shows during Edinburgh's fringe festival.
Visited Oktoberfest!

I can teach you some Hebrew, and how to hold a sneeze. I am willing to learn anything. I believe knowledge translates into strength and power, and everyone has something to teach.
I would like to learn how to ride a bike - 23y/o and still can't. That's just wrong.