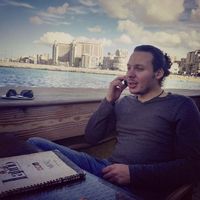 To see the world

I graduated from the faculty of tourism and hotels in 2008, joined the Egyptian army in 2009 and got out in 2010(by the way it wasn't a hard experience as most people here think, it was a good one)
i have a 6 year experience in tourism business but since the revolution i was forced to leave that job and work in a totally different field. I moved into the Call centers business - moved between call centers until 2012, but then i ended with starting my own business. 2011 was filled of lots of downers in my life but I began 2012 much stronger and more opened to life, and life opened all it's arms for me and i feel that i'm on the verge of something great. When i first joined Couch surfing community i wrote on my mission that i want to meet some awesome people, two weeks later i met the people who changed my life for good and i kept meeting awesome people every where i went. When i wrote on my profile here that i want to publish my first novel, less than two months later I had my first novel published. now my Mission is to see the world and I have already been in " new countries in one month and more to come

what people think of me...is important,
but what i think of me is what matters in the end...

being me sometimes is hard specially in our community, but being around people that only try to be them, makes it much easier

if you want to learn, you need to listen, and listening is the key to knowing the world

to be different isn't a bad a thing, in fact most of the time being different is the best

if you care that much about my look, why don't you gift me the clothes that indicates your opinion

your best friend is the one who always tells you your bad features, and tells the others your good ones

if your best friends don't accept the total truth from you, then they are not your best

to listen to someone... isn't just a job of your ears... your heart and soul must join as well

life can hit you as hard as it wants.. you only fall because you wanted to fall

I'm here because i want to help...i love meeting new people and knowing about new cultures...even if you just know the simple background of someone it could teach you many things, i don't have a couch for now but i will have one very soon. i have been showing people around for a while and i enjoy doing that.

2- listening to music ( some music can actually alter your mood and take you to a world that you create for your self, and i choose my music carefully).

4- traveling , traveling and traveling (been to Turkey and Lebanon and I aim to travel the world )

am addictive to watching movies actually, so i like many movies to write them, but a good movie will always leave it's mark

i like soul music and classics which helps me to get in the mood for writing and inspires me most of the time, but i listen to all good songs

Paulo Coelho books kill me, my favorite of all time is the Valkyries and manual of the warrior of the light....i like Stephen Myer's the twilight saga as well even though its not as good in the movie, and in Egypt i love a book called ( roz b labn l shakhsin ) for rehab Bassam, the name is silly but the book is amazing

1- Publishing my first Novel. though it wasn't as hard as i thought it was going to be, but seeing my book on the shelves of the book stores was pretty amazing

2- starting my own business. I have been talking about it around friends for nearly 2 years now, but finally being able to start it was pretty amazing too

to me this is the most amazing thing i have done so far...i still can't believe it was me

i don't think i can say teach out of my small experience, but I'm open to share all the experience and the encounters that i ever had in my life. If you arrived till this part and you plan to send me a couch request, please send the following Password (Ya Salam) so I know you have read my profile. I'm ready to share everything i know and to learn everything anyone is ready to let me know