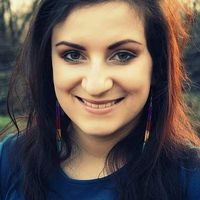 I have lived in:
Silesia Region and Kraków in POLAND,
London and High Wycombe in ENGLAND,
outside of Barcelona and in Mallorca, SPAIN,
Washington DC and outside of New York City, USA
Pafos, CYPRUS

"curiouser and curiouser", adventurous, open, friendly, witty, spontaneous, an art-addict, an aesthete, social butterfly, worldoholic, a bookworm, a tolkienologist, a belly/latino dancer and a yogi, drunk-on-life they say ;)

Traveling is a party to celebrate culture.

When I lived (and traveled) in Europe I preferred hostels, as CS was not that popular and hostels are cheap and of good quality there, or I stayed at my friends houses, and I have many all over Europe. In January 2014 I moved to USA and I surfed.

I was a part of Washington DC CS community for the whole 2014 year, making events and parties with other surfers. I loved it. I lived outside New York City the year 2015, and among the new york surfers I'm known as the crazy polish girl ;) I moved back to Poland and then to Cyprus, an island in the Mediterranean. Now I live back in London m older...
So, unfortunately, I am not able to host right now.

I am an art admirer, also a critic, so I have pretty high standards if it comes to music, movies and books. An art museum is always on my travel list (and so is food :P). I enjoy going to the movies, I read a lot, any music/dance/drama performances are my free-time priorities. Couch surfers from the Washington DC area know I was almost living in The Kennedy Center of Performing Arts.

Plenty, yet still not enough. It will never be enough, but I try every day. I love challenges ;)

I used to be a belly dance teacher, so I can teach you that. I'm really good at latino dances too! And yoga and zumba! I can also help if it comes to photography, make-up and learning languages (although I am still struggling with them as well). I can definitely share my positive altitude, but I require you to also give me some of it in return ;)

I bring positive vibrations and I always see beauty in people. You won't be bored with me. I can also do a dance show or organise a party ;)