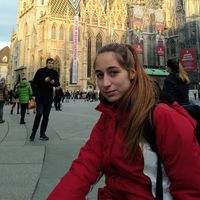 Hello! My name's Eleni and I'm a physics undergraduate. The world's huge and I'm definitely small but I have big plans and an average sized backpack so there's nothing stopping me - besides exams and lectures. So when I'm home studying, it's always a pleasure to help other travellers any way I can.
I also adore colourful and cute socks. Thought I'd put that out there 'cause it says a lot about me.

The whole idea of couchsurfing makes so much sense to me that I'm honestly pissed I didn't think of it first. I love being around people, and especially ones that feel the way I feel about travelling.

I like most music genres, but especially swing, classical, jazz, alternative, rock and indie! I do like blasting Taylor Swift songs occasionally and singing my heart out!
I absolutely love Rick and Morty!
Only once have I watched a film and thought "Wow, that was a bad film". Really felt like I wasted 4 hours of my life (I watched it twice).
I love all Dan Brown books, and mystery books in general.