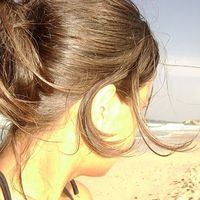 No idea, to find it out?

I don't really know what to say, I'm definitely not the best person to write something about me. I'm very responsible and reliable (but I'm probably not the most suitable person to say this). I love reading, travelling, languages (in fact, I studied modern languages and literature at University).

What do I live my life for? I don't know. But for me the contact with people is really important. Helping and talking to people help me to find out that there's still a chance.

I have no idea, what should I do? Just tell me, I'll do all I can. I really love this project!

I've been hosted by friends and also have hosted friends, both: Host and be hosted are great experiences, man lernt sehr, on apprend beaucoup, uno aprende mucho. I have totally forgotten how to use the impersonal in English!

Travelling, cultures, languages, literature, nature! Meeting people who also enjoy travelling, reading, meeting and getting to know people all around the world! I'm a passionate of cultures. I tend to be pessimistic about people, however people always amaze me, and make me change my mind.

Wow, this one is a really difficult question to answer. I've seen people who have nothing but smile. In 2006, I met a little girl (she was about 5) who had lost one of her eyeballs cuz when she was 2 years old a bullet had entered into her house (horrible fact, there are places in the world where a bullet can just enter into your house) and pierced her skull. Miraculously, she didn't die (she told me this as it was the most natural thing in the world, I was completely moved, ashamed and amazed). This marvellous child was really sweet and smart. She gave me a lollipop and looked happy. I don't know if what I've written answered somehow the question, but I must say that for me it was amazing to discover that such a beautiful girl exists.

2014 hit me in so many ways, that it took me really long to get back on my feet. In June 2015, in the middle of my struggle, feeling totally vulnerable and lost in the merciless world we live in, moved by a promise that somehow I felt I needed to fulfil, I set forth on an incredible bicycle trip from Leuven to Berlin. With no training (at all), no bicycle knowledge nor tools or spare parts, I started my journey with two kilos of carrots. Given the circumstances, it was, no doubt, a very irresponsible decision.
After the first day of intense cycling, with all the likely and unlikely losses of my way, the goal of reaching Berlin, even the need to fulfil the promise, transformed into a mere excuse for the most beautiful and meaningful trip I've ever done. Wonderful encounters and re-encounters, generous fruit trees and poignant landscapes were motor and source of inspiration. A lot of things were left behind, yet I'm convinced that I took with me the most important ones.
I survived to the harassment of an exhibitionist in a lonely neck of the woods in Germany, and to threatening deer (I swear they were really scary!). I survived an electrical storm and to the highest temperatures recorded in Europe in the last three decades. I survived to exhausting uphill climbs and to the deathly Belgian cycleways. I survived to google maps' mistakes and to my infinite blunder. But above all else, I survived to a 1600-kilometre cycle ride.