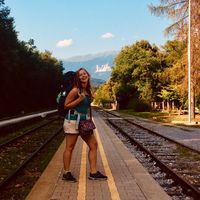 i study translation &amp; interpreting, hoping it would be my job one day and i could translate incredible books that would survive generations

before the pandemic, travelling was my main passion and goal in life. it is not the same anymore, but i am still thrilled to meet people from around the world at home!

i've met so many amazing people during my travels and I can't get enough of that. i want to meet more of you. i think that couchsurfing is an amazing project based on sharing and solidarity and, gosh, we know that's needed in the world!

and i've met my boyfriend on couchsurfing, so you could tell that CS actually changed my life. this is why i'm here and why i'd probably never leave 😅.

MUSIC
i actually don't listen to music much these days, so i am happy to listen to anything that other people love and want to share

MOVIES
i am a former film student, so you can talk to me about classics as well as modern international cinema and even marvel movies
BUT! my all-time favourites include Chungking Express, Before Sunrise, Princess Mononoke and Jules et Jim

BOOKS
books that i consider to be my favourites are the ones that i've read only once years ago, so it is hard to stand by that anyways, but the books that moved me deeply at some point in my life were for example Watership Down, Wuthering Heights, Norwegian Wood
i try not to miss out on anything by Édouard Louis, Sally Rooney, Leïla Slimani

i think anyone can learn something from anyone and it's even stronger if you meet someone from a different culture. you suddenly realize how many perceptions of the world there are, but at the same time, how similar we are and not that different after all.

i am not a party person, so if you are looking for somebody to go around night clubs in prague with, i am not the right buddy for you 😥.