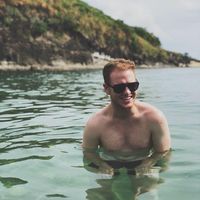 I'm a Project Manager in the mid tech industry, but in a past life i lived in Asia where I worked as a freelance lifestyle and travel writer. I used to work as a board game coach, so I’m always up for a game or a drink.

I travel a lot for work, so hosting is dependent on that.

I'm interested in meeting new people from a variety of backgrounds across the globe!

I have uncultured taste when it comes to music, so I rely heavy on friends and their public Spotify playlists to guide me.

Movies are such a mood based thing, so while there are times I just want a good action flick, anything quirky or character driven will probably be added to my Netflix list.

I wrote an award winning play that was performed on my university's main stage when I was 19.

I can bring good times and Virginian hard cider!