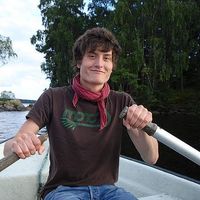 currently it is to spread my music, I reckon. Check out www.youtube.com/watch?v=0cCBG8hdXUc

I'm really into making music (playing guitar and a few other instruments, singing) and literature. Also into different kinds of sport.
I'm usually very friendly and open minded, make lots of jokes in the right surrounding, sometimes may appear shy, really depends on the situation.

Well lots of stuff, being the best Milan I can be maybe... treating others the way I wanna be treated... I like the line: I get along just singing my song people tell me I'm wrong... fuck em!
You should generally try 'n listen more to yourself then to what society tells you.

I like to get to know people from all different parts of the world.

We had quite a few people staying in our flat. They always were very decent and easy to talk to. Never made any bad experiences.

Also I crashed at a lot of places in different countries. It often happened that I sat around with them talking and laughing for ages, so that we'd totally forget about the time and our plans to hit the bars would have to be dropped, due to the late hour.

Playing music, writing songs and lyrics,
playing football, volleyball and other sports,
literature, I love to read and I also have tons of ideas for stories in my head that I finally have to write down. been a long time since I finished my last story.
food, I love to eat and to cook food from all over the world.

Meeting an old lady on a train from Montenegro to Serbia, who couldn't speak any other language than Serbian and yet we made jokes and laughed for ages.

Running into a black bear, while hiking in Northern California. We had been told the other day to take some wood and make ourselves really big in front of a bear and scream. So that's what we did and it worked at least a bit, but the bear didn't run away completely so we figured we better leave. We were lucky it wasn't a mother bear.

Being on tour through Ireland and England with my band, Alpaca Redemption.

I can teach you juggle tricks, playing guitar, bending the harmonica, whistling with your fingers, cooking.
Also I can share tons of stories bout weird or funny situations I ran into, fun facts, horror stories, etc.

I wanna learn more about cultures and history, magic tricks and how to walk on my hands. It might be a relieve to sometimes see the World the other way round!