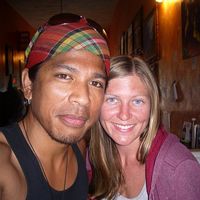 (IMPORTANT IF YOU'RE SEEKING A COUCH: Although I do enjoy hosting Couchsurfers when I can, I only reply to personalized messages that reflect at least some understanding of me based on actual review of my profile first, before contacting me. Also: As of 4/30/21, I'm fully vaccinated for COVID and can easily present my vaccination card; I will only host people who can also present their card.)

Following my heart and conscience, not status symbols.

Life's been good to me and since I was 21 I've been into giving back. (see below: "Interests," "Philosophy," "One Amazing Thing")

Having a brother with a mental disability and at one time a girlfriend with a physical disability have had a major impact on how I view the world.

I LOVE my native state, especially the brain candy in the San Francisco Bay Area urban hub and what's within a three-hour radius of that hub in terms of wilderness candy. This love is all over the images in my non-"Top Level" photo folders (all of which give a snapshot of my life in the year 2010, the last full year that I part-timed from my cabin and on the road doing anthro research for the feds, shortly before needing to relocate on a crisis basis to be a caregiver for family). Consequently I love showing Cali off to all guests - friends and strangers alike. Please use me as a resource!

My travels have included three active war zones while not connected to any kind of institution or organization - in Asia, Africa and South America. In my 21st century travels I've eaten meals with present-day headhunters, cave dwellers and cannibals, and in the 90's with 16-year-old shepherd boys who've fought off and killed marauding lions with wooden spears.

Ever since I renounced organized religion and materialism at 18, I define "success" and "beauty" and "strength" and "wealth" very differently than a lot of my fellow Americans and Westerners. I still abide by the hippie adages which I remember from my childhood in the late 1960's: "Do your thing" (i.e., value personal authenticity) and "Don't put your thing on others" (i.e., the Golden Rule).

Although life has been VERY generous to me since I was a teenager, I was fortunate at a young age to learn for myself without external pressure that there's more to my life than my personal happiness, pleasure and comfort. Thus I strive not to have a lazy conscience and I believe it's important to work for social equity and social and environmental justice, as opposed to mere prayer, charity and self-improvement.

Long before the Internet, I'd first extensively couchsurfed at 18 and 19 while hitchhiking and busking throughout Europe, and was blown away by the kindness of strangers not only there but also on my very first coast-to-coast road trip across America when I was 19. I spent my entire 20s in my favorite city on earth - San Francisco 1984-1993 - and in return, I regularly took in travelers and regularly picked up hitchhikers during that period of my life. When I joined CS at 45 (in 2008) while on a 3-month road trip of the U.S. West Coast, I was pleased there was a website that reflected exactly the travel-related perspectives I'd first acquired as a teenager, and I signed up immediately! :)

Prior to spring 2011 the vast majority of my participation was as a Couchsurfer, which was awesome. After more than two-and-a-half years of having only a "coffee or a drink" status, however, I decided that I myself wanted to be a host so I started offering a couch to surf, however tight my bedroom space was. But in September 2012 I felt compelled to leave my beloved Bay Area to tend to family crises involving my then-dying autistic brother and my elderly mother with creeping dementia. She passed away February 2017 and I now live alone in my late parents' modest home.

Backpacked in Alaska and California in a previous lifetime, but these days I'm just a boring camper who's happy playing guitar around a bonfire with a parking lot nearby. Love wild animal encounters and have swum with and touched gray whales (in Baja, Mexico), among mating and fighting humpback whales (off Maui in winter) and 50-foot whale sharks (in Bicol, Philippines), fed wild alligators (Louisiana) and sea lions (Washington state) by hand, and even had a wild deer take crackers straight out of my mouth (San Juan Islands, Washington state). Don't EVEN ask me what funky animals I've eaten across the globe! Before I turned 50, when I'd been fortunate enough to have access, I occasionally enjoyed non-competitive sports: scuba and snorkeling in the tropics, snowboarding, riding horses, whitewater rafting, sailing and kayaking. Would love to improve my still-novice-level surfing. Did the tandem skydiving thing twice, and would do it every week if I had the cash!

At 21 before college graduation I was offered a good-paying job in my major at CBS in New York City, but I blew it off to live among various communities of artists, bohemians and activists in San Francisco. Life became a permanent 24/7 adventure and I never looked back on rejecting a promising career in Manhattan. At 26 I once again decided to abandon financial security (my then-dream job of four years) to become a full-time starving musician, performing my original music for a few years in SF and Seattle clubs. Also in SF, used to jam for dancers at parties and operate liquid lights at raves. Never got signed sadly but I still love to jam with fellow musicians from time to time.

Been an activist for years, fighting the fascists and corporate polluters including while on paid office staff with major human rights, civil rights and environmental organizations. In more recent years I've been involved with U.S. taxpayer-funded conflicts in the Middle East and with historical projects honoring my heritage (Filipino American).

Been a longtime yogi. I see my activism as a karma yoga extension of intense kriya yoga meditation which I did from 20 to 22, from which I accidentally attained what are known as "siddhis" (which terrified me at the time). My early explorations of Zen, Taoism, indigenous cultures and shamanic medicine from 18 to 22 also continue to inform my lifestyle today. I'm 420-friendly and ayahuasca-friendly.

Music - My Top 10 classic pop albums definitely include The White Album, Exile on Main Street, Nevermind, The Chronic, Fumbling Toward Ecstasy, and the Garden State soundtrack. Plus I'm a veteran Deadhead. Have yet to hear a bad tune by Leonard Cohen, Radiohead, Thievery Corporation, War on Drugs, and Zero 7.

Books - Among my Top 10: A Guide to the Good Life, Guns Germs and Steel, The Christ Conspiracy, Fingerprints of the Gods, Siddhartha, Tao Te Ching.

For reliably non-bullshit news on the U.S. and Israel, I religiously skim the daily headlines from Amy Goodman ("Democracy Now!"), as well as sites of other Jewish intellectuals like Noam Chomsky, Phyllis Bennis, Glenn Greenwald, Max Blumenthal and Miko Peled.

In my early-mid-20's I was directly involved in helping save hundreds of refugees' lives, most of them threatened by U.S. foreign policy. In my early-mid-30's I was active in grassroots movements against fascist right-wing federal officials: to declassify documents exposing extensive CIA torture, to ease restrictions on war refugees' ability to reside in the U.S., and to reauthorize the Endangered Species Act. I am legally considered a criminal in a foreign country due to my legal non-violent political activities within the U.S., and I thus have contributed to a MAJOR blow against that foreign racist government's economy. As a result of all these successes - learning first-hand that you can speak truth to power and sometimes win big - and as a result of witnessing firsthand the joy which humanity is capable of in the rural Third World (a joy that too often eludes middle-class First Worlders), I permanently shed the mediocre lust for yuppie trophies long ago. Everything since then has been gravy and if I died today I'd know I made a difference outside my personal circles of loved ones and for future generations.

But OK: amazing NON-activist things I've done include sneaking to the top of the Golden Gate Bridge at night, operating a helicopter for an hour over Los Angeles without a license, performing my original music on a national TV show in Germany, riding atop a train car in the Andes Mountains during a nighttime lightning storm, backpacking in Denali Natl Park (Alaska) during a blizzard, interviewing headhunters and cannibals, traveling through war zones in three different continents, meeting a 134-year-old man in the African bush, sleeping in a cave with a foreign country's last surviving cave-dwelling tribe, witnessing a live birth at age 9 while my mother and sisters acted as midwives (my first cousin, in the rural Philippines), being fully present at my father's death, and being married (to my now-ex-wife but still close friend) by the Dalai Lama at his home in Dharamsala. Was also instrumental in helping my once-dying brother stabilize and enjoy a higher quality of life.

If you're learning guitar for the first time I can definitely give you basic tips and pointers.

If you've ever been interested in "giving back" in terms of actual committed action in the world to resist systems of oppression, activism has been a huge part of my adult life and I'd be happy to provide decades of insight. (When I see what passes for "people of faith" in America today, I SO wish that "Thou shalt not consciously enable systems of oppression" was the 11th commandment in the Jewish Torah and Christian Old Testament.)

Other than guitar or activism tips, if you're willing to take the chance: cooking lessons with regard to less-than-healthy but yummy Filipino-style meals.