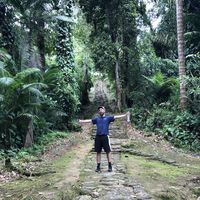 I’ve had a lot of amazing experiences as a Couchsurfing guest, now I want to pay it forward as a host! I’m a journalist/editor who lives in Toronto and loves sports, rap music, and exploring the city. My apartment building is in the middle of downtown and close to a bunch of amenities. I work some weird hours, but I’d love to show you as much of the city as I can!

I want to see the world and learn about different cultures. I had an amazing time Couchsurfing in Chile and Peru, and it's something I wanna do as much as I can while I'm travelling. I also want to pay that forward and help guests have the same great experiences I’ve had Couchsurfing.

I can show you all of my favorite areas in Toronto, make a great meal, and swap travel stories.