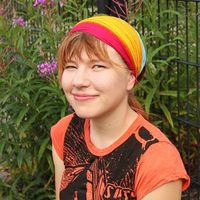 I'm 26 years old traveler with a great sense of humor and warm heart.
I'm not that shy than Finnish people usually are, but I appreciate my own space sometimes.
I like multiculturalism, sharing values and languages.
I am willing to host guests for about 1 week at maximum. Weekdays or weekends, it doesn't matter.

I have hosted many people in my place. I think Couchsurfing is a best way to meet new people from different countries. I've also surfed couple of times in Finland and during my trips in Europe.

-I try to read at lest one book every day
-I'm also into creative writing
-I do sports sometimes (swimming, cycling, yoga)
-I'm a bad singer, but still love it
-I'm not a small talk-person, but I love deep conversations about politics, feminism, religion, traveling and meaning of the life
-I'm volunteering in Amnesty International, Finnish Red Cross and Plan International
-I do love SALMIAKKI (Finnish salty caramel), good black coffee and sleeping loong at morning
-I'm not usually nightlife person, but sometimes in the right company it's awesome to dance until the morning
-I love to cook with my friends, hosts and couchsurfers

When I was eleven years old, I travelled with my parents to Luxor (Egypt). I found out that there was kids of my age, who begging for a money. And same time they looked so much happier than us. I realized that the money is not a way to happiness.

After tiring summer, I went to Barcelona with my friend. One day we walked to Park Quell. We sit there, held each others hand and wind blew. And then I realized that some times you have to go far away, that you can see closer. After that trip I started to travel more often!

I can teach Finnish for you. Believe or not, but it is second hardest language in the world ;)

I can teach cooking and baking, because I was a pastry chef. I can show, how to make perfect Pulla (Finnish Pastry).

I would like to learn new languages, and of course try some new recipes :)