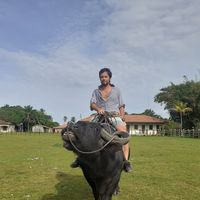 If you want to be hosted, you are very welcome but please read my profile, and read about my home. There is one password on each of these pages.

I like adventures, new discoveries and challenges, because I think it makes the life much more interesting, especially by meeting great people from around the World.
Actually, when I got my master's in political science, I was very happy, but I also realized that after more than 2 decades in classrooms, it was time to go far away, meet people, cultures, and learn more about myself and the other...
Since then, I walked on the Panamerican, the Transiberian, the Silk Road, the Transsaharian...
At the same time, I worked as university director in Guinea, NGO executive in Turkey, political science lecturer in China, English teacher in Thailand, volunteer from Palestine to the Pacific...
I am currently in charge of the relation between a university and companies in Kinshasa; if I am not on vacation visiting the neighbor countries, I'll be very happy to meet you there.

Til 2017, I was mainly going to hostels, but I progressively felt that, everywhere in the world, I was sleeping exactly at the same (cold) place, full of people sticked on their smartphones...
So, as I was planning to start a World Tour, I decided that I had to change my way of travelling. I tested it in Europe, met amazing people, and so I went further and met amazing locals on 4 continents, and brought so many nice memories from everywhere and with tens of new friends...
Definitely the best way to get human and friendly experiences, you never know how nice the next CSer will be, you only know he/she will be amazing. It definitely changed my way of travelling and, since travelling is an important part of my life, Couchsurfing also somehow changed my life...
And finally, when I got my own apartment in Thailand, I became a host, considering that it was fair after all that time travelling, and also in order to continue meeting nice people with nice stories and, somehow, continue travelling... Haven't hosted as much as I had been hosted (my city was not that touristic) but I've really liked it. So, I am so happy to do it again in Kinshasa, if there are adventurous people backpacking around there.
CS for ever!

Music: Everything, depending on my mood. I love listening and even playing classical music for example; but at the same time I am curious of the most recent hits. What impresses the most is the diversity between the traditional musics of the world.

Movies: I barely find time, but I like mainly comedies or, of course, adventure movies, when they make me relax and travel around the world at the same time.

Books: I have a certain interest in classics, but my favorite remain the historical books.

Following the narcos unofficial road in Venezuela, near the Colombian border, in the middle of the night with a taxi.
Playing drinking games based on Kim Jong Un's best seller in a hotel room in Pyongyang (North Korea).
Seing a terrorist attack just under my window in Kashgar (Xinjiang, Western China) and being then interviewed by Reuters about it.
Reaching Timbuktu (Mali) in 2015 after 24 hours in a jeep, and slowly understanding (there was no tourist, only the army walking all around, and the police registering various details about my accommodation plans in order to protect me during the night) that I had definitely not chosen the best time to visit Northern Mali.
Running away from Cambodia to Laos because I hadn't agreed to pay the 3USD "corruption fee" to the guys at the immigration before leaving.
Making a group of Nepali sherpas astonished when I told them I had been hiking from Manang (3530m) to Muktinath (3800m) via Thorung La (5416m) and that I had managed to survive the acute mountain sickness.
Becoming likely the youngest university Chancellor in the history, 25 years, 9 months and 15 days old in Kankan Nabaya University (Guinea).
Telling tons of bullshit to a group of gangsters in Palermo until I was able to escape them without any loss of money.
Convincing the future French president François Hollande to sign various commitments for the children rights, one month before the election.
Playing chess with World champion Karpov in Russia and being able to get a draw at the end.
Publishing my first book when I was 14 years old.
Surviving malaria, dengue fever and covid-gamma.
Being part of this world.

I can teach about French language and French culture... I would love to learn basics in the languages of the countries where I am travelling, and the history and culture of the places...
I am curious of what the people I meet have done extraordinary or normal, what motivates them in this world, how they see the future. Special focus on their most crazy adventures around the world.

I would like to share interesting discussions, with nice people, about almost any topic...
I can also share my experience of travelling (on the cheap) in many countries... (it has become a kind of speciality) and hear about other places they would advise. (157 countries at date...)
As well as all what I can share... life is sharing...
Password n°1 for being hosted is: "Follow".