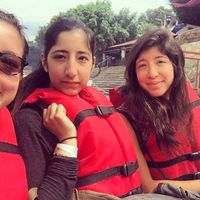 Hi everyone,
I'm Emma, an international student from France.
I live in New York and I have a roommate with whom I'm sharing, well, a room so apologies but I cannot host until further notice.
I'd be happy to meet up in the city though.

I benefited by being hosted in Europe and Brazil in 2016-2017 and in turn I hosted in New York in 2017-2018, (almost!) all my experiences were positive so I see no reason not to be on Couchsurfing!

I periodically cram new languages with duolingo and grammar books, my speaking abilities decline as soon as I stop practicing but I get to keep understanding local papers and literature which is for me very rewarding.

I can elaborate on that when we meet I feel a little weird making a list here.

I'll go with two:
- Solo travelling in the southern coast of Brazil one summer
- Travelling with my sisters in Mexico the summer before (which is where my profile picture is from)

I've been learning tango since 2018 and I never miss a chance to dance when I can :)

I can show you around and tell how to get by in the city, I've done most museums and explored most neighbourhoods from Harlem to Coney Island. I'd also love to discover new places with travellers!