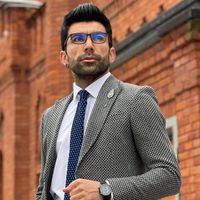 . Currently I have been living in Germany for my education. I study PhD in Political Science. I am a freelance Model and Actor at the same time. People say I am a versatile, positive, clever, funny and open-minded person. I like travelling and everything about it.

✔To meet people from different cultures when I travel
✔To help people who visit my city by hosting them, guiding them and showing them the city
✔To make more friends from all over the world
✔ To advance my foreign languages

Music: I like any kind of good music but my favorite is Latin music.
Books: historical, science and psychology

FROM MY TRAVELBLOG
Because I can't imagine a new year without snow and because Poland was one of the countries I was most curious about, I decided to go to Krakow, Poland for the first few days of 2019. I was gonna fly from Dortmund to Katowice and then get a bus to Krakow. Everything was planned perfectly. I went to Dortmund one day before my flight and stayed there with a friend because I was afraid of missing my flight at 8:00 in the morning if stayed in my city, Duisburg which is at least one and half hour far from Dortmund Airport.
I didn't sleep much at the night before the flight(How could I? It's new year eve). So I fell asleep after turning off the alarm in the early morning. Fortunately, my dear friend woke me up half an hour later and race against time started. After an intense 40 minutes, I was at the airport waiting in the queue for baggage control.
When they checked my baggage which was a cabin size suitcase as I bought with ticket, the controller said the airline company has changed the rules not long ago and according to the new rules, only backpacks are accepted as cabin size bags. So I was supposed to pay an extra fee which was more than the price of my suitcase. I asked ‘Hey, I bought the return ticket as well. Do I also have to pay this extra fee when I turn back?’ The answer was ‘yes' which meant the fee I had to pay wasn't only more than the price of my suitcase but also more than the stuff in it. Considering that I was gonna stay in Poland for only 3 days, finding a quick solution for this last minute problem was crucial. There was only 20 minutes for closing the doors. I started to think. And yep, i found it!

. I took all small and necessary things which I use everyday like my charge adapter, toothbrush etc. with me and I went to the plane leaving my suitcase in a random place at airport.
When I turned back from Poland 3 days later, I went to the Lost and Found Office in Dortmund Airport and I told that I had forgotten my suitcase somewhere in the airport. They said ‘Oh, yes we have a suitcase which matches your description here’. They gave me my suitcase and i went home:)

I can teach anything about the sports I do, Administration Systems in different countries and several subjects related to Migration and Public Administration, theatre and acting. I learn something from everyone.

I can cook traditional Turkish foods for them