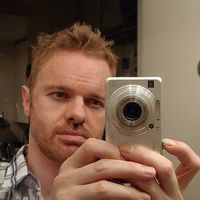 no mission. just taking it one day at a time :)

Important note: I'll be out of town from December 16th till January 8th.

I'm a gay guy from the UK and I've lived abroad for quite a while; three years in Rome and sixteen in NYC. I live in Manhattan, on 42nd St, in a so-called "luxury high-rise"...but it's a studio apartment so if privacy is a big issue for you then this probably isn't your best choice!
Career-wise I've been in the tech side of the TV/film industry my whole life, although recently got my Real Estate license and currently giving that a try. Probably I could use a good long break from New York, having been here far longer than most people could ever tolerate the place, though I'm not sure I would want to leave it behind forever. At a bit of a crossroads in life right now...could do with some major changes, I think!

I've been single since 2015, I'm not on couchsurfing to get dates or sex (there are far easier ways of doing either of those than inviting people to come and live in my home for a few days) and meeting someone who actually lives here would make a hell of a lot more sense for dating! All that being said, I'm the kind of person who actually WOULD move half way around the world to be with someone...or persuade them to move to NY! I moved to Rome because a girl I knew got offered a job there and we thought it would be fun to go together, and in Rome I met a Canadian girl who wanted to start a business in NYC...so I flew over with her and the rest is history. Point being, these things aren't impossible...and I keep an open mind about possibilities!

One thing many of you will likely have noticed is the incredibly high number of nudists on couchsurfing. With gay hosts it seems to be like 50% of them claiming to be nudists...and they mostly seem to require that their guests participate. I respectfully call BS on that, since while a few of them may be genuine "naturists" I, personally, think it's kinda creepy to require someone to get naked in return for accommodation. Rest assured I make no such demands of anyone!! Lol

All that being said, as far as I'm concerned CS is just an initial introduction, a nice way to meet like-minded people, and I do try to only accept guests (for their sake as well as mine) where I feel there's a good match as potential new friends, even if only for a short while. A few guests (really not very many at all) do seem to just remain as "couchsurfers" the entire time that they are here, but fortunately in most cases the couchsurfing beginnings last only a few moments and from then on it's just like meeting a new friend, and continues as such. For that reason I would only encourage someone to send a request if they genuinely want to spend some time with me, and feel like we'd get along well. One of my favorite/best-ever guests was a straight guy, so I'm definitely not only interested in hosting gay guys, but again I'd say please only write to me if I sound like the kind of person you'd genuinely like to hang out with. I'm not just some kind of free hotel!

I guess it's fair to say that I'm quite a warm/tactile person with people who I like, and I think it's important for me to state that right from the start. After 3 years in Italy I realised just how "stiff" Brits can be. Each time I'd arrive back in the UK after several months abroad I'd barely even get a hug when seeing friends/family after a long absence. In Rome it was hugs and kisses every day with people I'd never even met before! (Much nicer!) My old profile, which was quite brief and remained unchanged for years, made no mention of any of this stuff, and everything was working pretty well...but one recent guest was just...ughh...frosty...and I almost felt uncomfortable sitting on my own sofa, for fear of accidentally brushing against him. So, I decided to make it clear: no frosty people!

Typically after a guest has been out exploring the city all day, I've been working, and finally we're spending the evening on the sofa watching TV, sharing a bottle of wine, then I'm gonna be far more comfortable if it's with someone who's also "cool" and relaxed about physical closeness. I am an absolute cuddle addict, I admit it, one of the best things in life in my opinion! Don't get me wrong, it's not a "condition" or "requirement" of staying here...if you want to sit at the other end of the sofa playing with your iPad that's totally cool...just don't be an ice maiden! If this all sounds good to you, great! If it sounds weird to you (which I can understand, coming from a complete stranger!) then we're probably not a good match for sharing a relatively small space. No point either of us being in a situation that we're not both completely comfortable with. Life's too short to spend time in awkward situations, for the sake of a free place to stay!

This next one might sound a bit weird to some people, but if the vibe is right, mutually, then I'm cool with sharing my bed, but that IS the exception, not the rule. Again it's not about sex, I just like human contact, even if it's no more than a hand resting on someone's shoulder, us both dressed head-to-toe in pyjamas...especially on a cold winter's night! Also completely respect anyone's wish to sleep alone on the sofa-bed, which is the default plan, and of course I always have clean pillows/sheets/duvet for the sofa-bed. Certainly I would expect anyone who's either straight or in a relationship would probably be much happier on the sofa-bed, and I'm absolutely fine with that, of course.

I think the references left by more than 100 people speak for themselves really. Nobody gets 100% positive references/reviews by being a creep, or by not behaving in a decent, respectful way. I have the occasional one-line reference where it's obvious we didn't exactly "hit it off" as "new BFFs", but most of my guests have left awesome reviews and I'm pretty proud of my couchsurfing track record. The best way to keep that going is, like I said, to only encourage like-minded people to come and stay, and likewise for me to only accept guests where I feel there's a decent amount of "connection potential". Anyone frightened-off by what I've written is welcome to keep looking elsewhere, or book a hotel! Anyone who isn't...is free to send a request! Simple! Please do write a reasonable amount about yourself though, and make it clear that you have read my profile properly and fully understood what kind of people I like to host. If we're not "on the same page" then it won't be a good experience for either of us. If we ARE on the same page, then it should be a great experience!

Also, I've been getting a lot of requests recently for 2 people to come and stay, but one person really is the maximum. In a studio apartment "two's company, three's a crowd". (Two being you and myself!)

I don't believe in religion, but I believe in karma (to a degree). If i can help someone out, then I will...and hopefully that goodwill will come back to me some day. Couchsurfing should be a little give and take, on both sides. Some guests are only in it to take; to get what they can for free. Put it this way, I'd never accept someone's generous hospitality without showing a little gratitude. It's just common courtesy, right?!

REQUIRED READING FOR ANY VISITOR ! :-)

I'm not that much of a traveler, so probably won't be surfing too many couches myself, but it's cool having people come to stay for a few days...or sometimes longer. It's kinda like having a roommate but without the annoying aspects of sharing an apartment (and only when it suits me!) Often it's actually more like having a "new best friend" - even if just for a short while.

Mostly good so far! Have had some really great guests. It's like everything in life though; unpredictable and variable! But mostly it's been cool :)

Movies, tv, music...the usual things. Into interior design but it's tough with rented apartments...not allowed to change the kitchen or bathroom or anything major :(

My VIA referral code!

VIA is a great way to get around NYC: extremely affordable, ultra reliable. It's like Uber Pool except MUCH MUCH better. With my referral code you get $20-worth of free rides. We each do! Most rides within Manhattan are $5 or less, in my experience. Often you'll have the car entirely to yourself. It's also a good way to get to/from the airports.