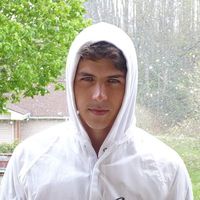 Get better at the things that I say I want to get improve on.

I would prefer a long run on the beach.

Do what makes you happy but don't infringe on others liberties.

Looking to host while I'm stationed in NJ. Would love to pay back the generosity I've received through couchsurfing.

I've only been hosted by about 10 GREAT people. I was hosted on my bicycle trip across the united states.

I rode my bicycle across the united states.

What can I teach? ... HMmmm. I can teach how to juggle and how "float" in mid-air (!!).I am particularly interested in learning more about self-sustainability, farming, alternative housing, cooking and preparing food.