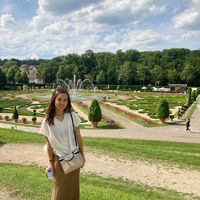 Born and raised in SoCal, living in Japan since 23.
Joined the CS community when I was working in Germany in 2021 and met/connected with so many people! Hoping to do the same in Tokyo!

My friends recommended couchsurfing. They said it's a nice way to explore places you've never been and a fun way to meet new people from all over the world!

So far my experiences on couchsurfing have been nothing but greatness!

I can teach you Japanese :)