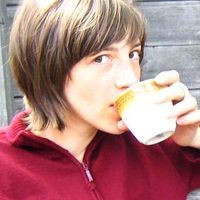 I pretty classically sold my stuff and left the United States for a while to wander around meeting new people and see different ways of living. Left home August 15th and then left the United States September 19th. I might be gone for a couple months or a year or forever. It's super open-ended. Money-making-wise, I am a graphic design and UX designer.

I'm not sure about a philosophy, but I have a story:

In the 1970s, my grandpa lived in Alaska, hosting people from all over the world. Heâs been hosting couchsurfers since way before couchsurfing.org. Itâs something wonderful to help a traveler, someone who is interested in experiencing other ways of life. In the early 1980s, he decided to move back to the Lower 48.

My grandpa built himself a home in the mountains of northern Idaho. He had several acres of property, and on it, he built a small shelter for any traveler who might need a place to sleep. It was very small, but had a bed and some supplies along with a note to travelers welcoming them to use the shelter.

No matter what situation he was in, he would find some way to provide for others.

mostly hosted, so far, in Nebraska. It's common for people on road trips to come through here, so everyone that's come through has a cool story to tell. Now that I am traveling, I have been super fortunate to be hosted by a couple awesome people!

and uh...I read the internet.

i almost slipped on the ice in the parking lot, but then i caught myself. so, i'm fine.

also, we were walking along the beach north of LA one night and saw the waves glowing super bright blue. algae-style. then I almost tripped over a dead seal.

hmm...I'm pretty at good cooking, some baking. banana bread and bran muffins. and salad. yeah. pretty good at making salad. I could teach how to screenprint.