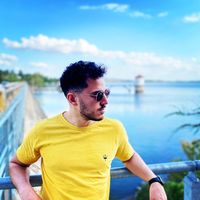 Since January 2020 living around Europe, currently in Dublin 📍

I'm a lawyer. I like travelling, meeting people, their culture and food, learning new things, I like sports and I love languages, I always try to learn new things, I would like to make friends around the world, hear about their travels and history.

Let's drink some beer or coffee, talk around the city.

I left my job, to travel for 500 days hahahaha

I can teach tou some Portuguese, something about Brazilian culture.