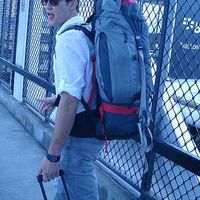 Learn and Listen from the world.

I've always had a open view of the world. Growing up, my mom was raised in a poor farm with nine brothers in a small two room house in Brasil. My dad was raised in a three story well off east coast milatary family in Pennsylvania. Night and Day. So I believe that people are who they are because of where they come.

Met some people who were surfing at a friend's of mine. Some spent the night at my house

listening, thinking, surfing, basketball, talking about what life will be like in the future, talking about how people lived in the past, history, hiking, reading, being put in awkward situations that eventually you realize aren't awkward at all

I accidentally flicked off my 6th grade picture

languages (English and Portuguese mainly). Know a lot about basketball. A lot of Math...if you really wanted to learn. I am a novice surfer as well