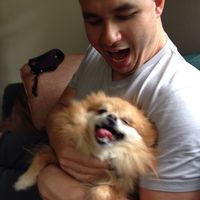 Haven't been active on here in a while because my current living situation doesn't let me host, but I used to be all about this. I did a lot of hosting and a bunch of my own surfing as well. Here's the list of stuff I've done:

Books: CivilWarLand In Bad Decline by George Saunders, Heat by Bill Buford, Kafka On The Shore by Haruki Murakami, Watch Your Mouth by Daniel Handler.

I lived in Hanoi, Vietnam for about a year. This is not an amazing thing for anyone who is from Vietnam or Southeast Asia, but for me, a white American guy who had basically never left Chicago for the first 27 years of his life, it was an incredible, transformative, unforgettable experience.