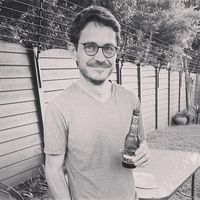 I love traveling.
And I love meeting new people.
So CS sounds like the perfect place for me!

I play in a band, so if your timing is good, I might even be able to take you along to some gigs!

I like to help people.
I believe we each have a purpose on this planet.
I try to reduce my carbon footprint where I can.
I believe in a higher power.
I believe in the truth. Even if it hurts.
I believe that I know nothing. I am inquisitive.
I am passionate. I can be intense.
I like to think that I think outside of the box.

I really enjoy showing people around my city. Having lived here all my life, I can take you to some off-the-beaten-track places.

I have officially surfed couches (and floors :) in the US, Mexico, and locally in Swaziland, Mozambique and SA, and have hosted and shown many people around Johannesburg and surrounds.
Most (99%) have been extraordinary experiences!

Chatting about the meaning of it all with strangers.
Challenging myself in unusual ways/facing my fears.

Music: Anything that moves me to dance, remember, relax, forget or just go crazy!

Tori Amos. Her music speaks to me in ways that I cannot explain.

Jack Savoretti. Discovered him in the UK while traveling and he is a poet who happens to sing.

Alexi Murdoch. What is it with me and these singer/songwriters from the UK?

John Mayer. I get a lot of flack for this (are you sure deep down you're not a 16yr old girl?) but apart from being a bit of a celeb, John is just a great guitar player and songwriter.

Dallas Green/City and Colour. The soundtrack to my 2009 US trip. Ironic (He is Canadian :)

Missy Higgins. So young yet so mature...

My favourite book is Nineteen eighty-four by George Orwell. Nowadays, I don't really get to read as much as I'd like to. I like autobiographies by interesting people. I also enjoy travel books. If I have the time, I'll read anything, as long as it's good! Not so much into fiction anymore though. Except if it's Terry Pratchett for a bit of comic relief.

Choosing just 1 is impossible. So here are a few, in no particular order:
*Drifting on a kayak in the middle of the bay of islands (New Zealand) and looking at the milky way. Never in my life have I seen so many stars...
*Hiking to the top of Half Dome in Yosemite National Park, USA
*Franz Joseph Glacier, New Zealand
*Hiking the Abel Tasman National Park in New Zealand
*Hearing Tori Amos sing my favourite song in the world (ever) as her very last encore - the only time on that tour she played that song!
*Being invited to a concert 'by some guitar guy' who turned out to be JON GOMM!!

I would love to learn some more languages. It would be great if it could be from a native speaker.
I am specifically interested in Spanish, since it was my grandfather's language, but I never knew this until a few years ago.
(I am of Belgian/Argentinian/South African descent. Crazy mix;-)

I can cook you a mean local dish, or a foreign dish for that matter. I like to eat, hence, I have learned to cook :)