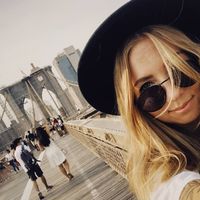 CURRENT MISSION: See it all

I don't have much of CS experience, but i am working on it:

Tooooo many to fit in this box