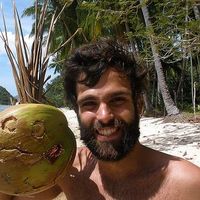 The world is the biggest book. The perception of the world depend of the eyes of the beholder.

I´m Eugenio, Eu for my friends
I´m from a beautiful town in the south of Spain called Málaga. I´ve been living in France, Scotland and South Korea.
I considered myself an open mind person, friendly, easy going, creative...I want to discover more aspects of mind travelling and sharing experiences with different cultures around the world.

Open mind.
The world is a book and those who do not travel read only one page.

In Seoul where I was one year and Málaga.