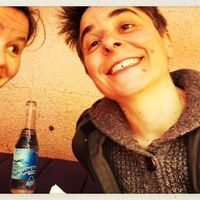 From Belgium, traveling with my girlfriend crossing US during May 2018, working both in art-house film industry.

We are traveling from New Orleans to San Francisco during May 2018 and we choose Couchsurfing to meet people during our trip, and share our respective experiences.

Shooting a film in Corsica in an abandoned village without roads and managed to bring all the materials for the film set by helicopter.

Share a nice moment together, talking about life and maybe rebuild the world! :-)

Our values, respect, open mindedness, curiosity, and having a great moment together.