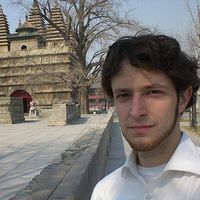 Exploring and learning. Ultimately I want my grand children to consider me the good grandfather. Going to take a while though, I dont even have regular children yet.

I am a profesional engineer, spent 5 years abroad 2006-10. I returned home to start graduate school and sometimes I still feel I have just arrived. I love history, architecture, cooking and talking.

I joined CS because it was a great place to meet locals and find accommodation off the beaten track. It really opens a different point of view, particularly in smaller, less popular cities. Even as I host less these days I really enjoy meeting up for dinners, drinks, and activities.

I enjoy traveling, languages, cooking, hiking, reading and a selection of crafts. I like to combine them reading in other languages, traveling for the sake of cooking, or reading while hiking for instance.

Recently on a Korean movie binge. Vengence Trilagy and anything else by Park Chanwoo. I also get a bit of enjoyment out of watching oldies like "The Apartment" and "Guess Who is Coming to Dinner"

The wildest thing I can think of right now was getting into a high speed chase in Cambodia. The border town I was in had a taxi cartel that bribed the cops to keep all foreigners there until they payed an exorbitant fee with one of the cartel members for transit out of town.
I got to talking with an independent driver who said he could take myself and 3 other to the next town for a reasonable rate.
We got in his suped up toyota camry and tried to leave when the cops started chasing us so he ditched that car and we ran through an alley to another car conveniently waiting. We started going north, even though the next town was south east but still the cartel followed us. For about 10 minutes we were on the run through the towns dirt roads littered with oxcarts, people, and huge potholes. A runner on a bike whiped out in one of the pot holes but we somehow made it out. All this time the driver had been playing the theme song to Titanic, rather odd but stirring chase music.

I am an accomplished chef and always enjoy whipping things up if people will give me access to their kitchen. My youtube channel shows off a bit of my cooking. http://www.youtube.com/user/MagnumChef I know a lot about Asian culture and language from living there for 5 years.
I also get involved in a lot of hands on three dimensional crafts.

I want to share stories from around the globe.