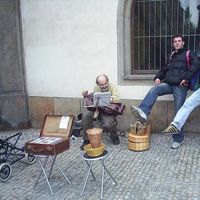 Living in Alicante, hopefully I can help someone

I don't know it s quite difficult to describe myself, but usually , people say that I'm funny, interesting,.... But the best way is to visit me and see by yourself.
ok, i know you really want to know something so you have to know that i'm an selfdefence instructor, a great cook, a language teacher, and yes if you want we can training together sometimes, yes if you host me i can let you try one of the most amazing dinner you've ever try and yes if you want i can help you in Italian (spanish too).
i used to work in finance, but now I'm in the marketing world.

Enjoy whatever you want and work hard to have what you want.....
i really believe in the power of the human mind, if you really want something, you are in the right state of mind and you'll do everything you can for reach your goal you have high probability to succed, of course nobody can be sure about the success, but history is full of person who have reached some goal that seemed to be impossible, so if you have a goal try to reach it, and if you wont give up you surely will obtain something.

when i host i don't simply give bed where sleep, but i try to have a great expirience with the other person, and try to do the same when i go into someone's else house

i've gone at a university in another city, so i start couch surf before even know of this website.

I'm interested in a lot of stuff, but mainly cinema, go out with friends, women, sports and of course travelling.
i love watching football match (especially when Juventus is playing) but i love even do sports (run, box, selfdefence...) and i've organized some survival course.
i'm now learning how to use photoshop and after effects, because i'm getting closer to the film making world.
i love learn languages and speak them, i used to teach italian to foreign people when i was at the university

harry potter (movies and books, actually i've read them in Italian, English, Spanish and French), braveheart, the gladiator
i think Bruce Springsteen is the best think that the world have heard, but queen, rolling stone, bon jovi, ac/dc, ecc have done their part to emprove our world :D

hard to choose just a couple of moment, surely something amazing was when i saw for the first time the colosseum, even because it was night and it shine in the middle of the city like the old soldier that still stand against its archienemys (the times), that should have distroied everyone else but not it.
i not remember exactly that day (i was really young), but probably the first time i saw the snow, cuz if i love it so much right now, i can barely imagine how much i could enjoy it when i was a baby

If you need to know something about varese ask me...
If you want to teach something about your city call me :D
as i told you i've some experience in teach selfdefence and italian, but everything you want to know about italian culture i can or can not know it :D, i can suggest you band, dish, city, books, movies, but of course i don't know everything of my country so if you ask me who have done a statue you've saw once in a magazine i can not know it.