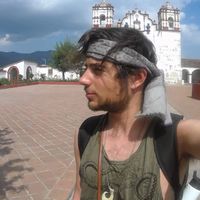 Ok, so. This is always the most difficuly part. I studied Neuroscience, but wanted to be an archeologist and also a physicist and above all a writer. Still in time to be a writer, though. Im trying to say that Im utterly indecisive: I would like to do everything, thats way I am constantly in a hurry. Then, I am untidy, incoherent, a little bit big-headed, and exceedingly weird. But also talkative, sassy, intolerance-intolerant (I love to shock bigots!), and curious, very curious, about everything, just like a baby.

Things I hate: hot greasy stuff on my skin, meowing cats, big-headed people, superhero movies, Nicholas Cage, most Hollywood movies, the pizza you get outside Italy with a creepy yellowish cheese that they claim its mozzarella but its NOT, pesto on salad (never do that!), vegetables on pasta with tomato sauce (never ever do that!).

Current mission: take it easy, which is actually very difficult.

"He did not think of himself as a tourist; he was a traveler. The difference is partly one of time, he would explain. Whereas the tourist generally hurries back home at the end of a few weeks or months, the traveler, belonging no more to one place than to the next, moves slowly, over periods of years, from one part of the earth to another. Indeed, he would have found it difficult to tell, among the many places he had lived, precisely where it was he had felt most at home."

Took part in a shaman ritual in Tuva republic (Siberia).

Teach what I know, learn what I dont.

I am seriously chatty, could talk about Italian culture for ages.