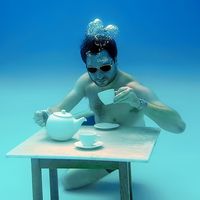 I love understanding new things (from how a coffee machine works to how people think), meeting people with different backgrounds, discovering new places,...
Describing myself feels easy, but would be distorted by the projection of how I see myself, and thus it's maybe better to just read the references; or even better, by meeting me and creating your own opinion! :P

The world is just one out of gazillions of planets - it's so tiny, and yet, it's so huge and complex.
There are all kinds of people with all kinds of beliefs. People with similar beliefs tend to clit together; at least if they're able to find them.
This means there are social and geographical boundaries to people's ability to see the world.
That's exactly why CouchSurfing is so amazing: it erases those 2 barriers.
When people of different backgrounds meet, and see how different lifestyles are possible, they tend to question their own point of views. So, the more the world is connected, the more people will become free (from their backgrounds).
I guess this could be a new wave of enlightenment? :)

Because CouchSurfing is super cool!

Apart from that, I love discovering some new beers while having chats about anything at all. It's always nice to get to know other life perspectives!

Hummm...
- Living for a year in Japanese host families.
- Living as a student in Shanghai.
- Making a lot of extra-ordinary travels.
- Being welcomed in a homeless guy's self-made little wooden house in the middle of Osaka-park in Japan to sleep over there.
- Crossing parts of the Sahara by motorbike.
- Skydiving
- Well... For more, just ask me about it when you meet me ;).